Nasrallah: all ships near Israel will be targeted by rockets 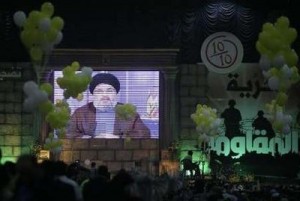 Hezbollah’s Hassan Nasrallah said on Tuesday that his fighters and arsenal is capable of wiping out Israel’s navy and any other ships heading to Israel in the event of a new war with the Jewish state.

“If you launch a new war on Lebanon, if you blockade our coastline, all military, civilian or commercial ships heading through the Mediterranean to occupied Palestine will be targeted by the Islamic Resistance,” said Nasrallah in a speech transmitted via video link to thousands of supporters massed in Hezbollah’s stronghold in Beirut’s southern suburbs.

Celebratory gunfire rattled through Beirut and fireworks exploded into the sky as Nasrallah started his speech.

“Whether along the northern or southern Israeli shore, we can target ships, bomb them and hit them God willing,” he added, speaking on the occasion of the 10th anniversary of the withdrawal of Israeli troops from southern Lebanon after a 22-year occupation.

“When the world sees how these ships are destroyed, no one will dare go there (Israel),” he added. “And I am only speaking about the Mediterranean; I haven’t reached the Red Sea yet.”

“The enemy is scared and we will keep it scared,” he said, referring to Israel. “But you (the Lebanese) should feel assured because the equation has changed.

“In the next war, we will resist, come out victorious and change the face of the region God willing,” he added to applause.

“The whole hullabaloo over the Scuds was so that Israel could get 200 or 250 million dollars in aid from the U.S. Congress,” he said.

“Despite its economic crisis, the U.S. finds money to assist Israel.”

He said his party stood ready for a new war even though it was not seeking a conflict and added that he would neither confirm nor deny Israel’s allegations concerning the Scuds.

“If you are strong, the world respects you and talks to you and takes you into account,” he said. “And as such we can impose our conditions.

“If you are weak, you will be eaten.”

Referring to the start last Sunday of the Israeli drill, codenamed “Turning Point 4”, Nasrallah thanked the people of the South “for their presence last Sunday in the South to perform their electoral duty without fearing anyone.”

“Many essential factors led to the victory (in 2000), topped by the people’s will, steadfastness, endurance and embracing of the Resistance.

“I’m talking about people’s will, about a popular majority and not about a consensus (on the resistance) in Lebanon.”

Nasrallah stressed that “the Iranian and Syrian support for the Resistance in addition to its triumph over the enemy on every occasion is what defeated the Israeli army and the people of Israel.”

“We are the ones who dictated the timing, scenario, and conditions for the enemy’s defeat and escape from Lebanon,” he added.

Hizbullah number one stressed that “the equation that defeated Israel is the equation of ‘the people, the army and the Resistance’ which is adopted by the president (Michel Suleiman), rather than the opinions voiced by some people about the Resistance.”

Nasrallah said that peace efforts in the region are suffering a “major dilemma”, noting that Lebanon and Syria are “in the spotlight and everyone is wondering about the possibility of war.”

“Israel acknowledges the existence of real challenges, that’s why it is conducting one drill after the other, the thing that affects its economy and the psychological state of the Israelis. Israel wants to benefit from the July war experience,” Nasrallah added.

He noted that Israeli drills aim “at reassuring this (Israeli) interior and this people, and the Iron Dome (anti-missile system) has not proved its effectiveness until this moment.”

As to the recent Israeli reassurances carried by foreign envoys to Lebanese officials, Nasrallah said: “The Israeli pacification stances are intended for the Israeli interior in order to reassure their people and of course not to reassure the Lebanese government or people.”