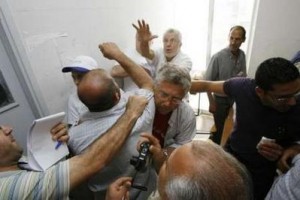 Sidon and Jezzine are the hottest 2 areas in the Municpal elections in south Lebanon.

Photo: Supporters of pro-Hezbollah former MP Ousama Saad and pro-government supporters of former prime minister Fouad Siniora fight in a polling station during the country’s municipal elections in the port city of Sidon in south Lebanon May 23, 2010