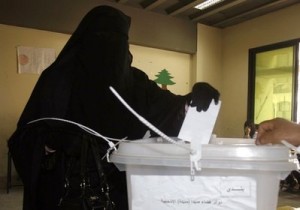 Voice of Lebanon Radio station reported at 6 pm that voter turnout in Sidon has exceeded 50 percent.

Former PM and Sidon PM Fouad Siniora called on Sidon’s voters to “massively” head toward polling stations, and urged them to ignore the the intimidation attempts, saying victory in Sidon is just around the corner.

Three people were reportedly arrested over the quarrel that occurred at the Lebanese-Kuwaiti School as former MP Osama Saad was visiting the place. The army intervened and cordoned off the site of the quarrel .

Photo: A Lebanese Muslim woman, casts her vote at a polling station during the municipal elections in the southern port city of Sidon, Lebanon, on Sunday, May 23, 2010.