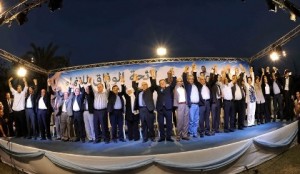 Lebanon’s Former PM and Head of al Mustaqbal parliamentary bloc Fouad Siniora on Friday called on Sidon’s voters “to massively head toward polling stations this Sunday to prove that we want the ‘Consensus for Development’ (electoral) list to succeed, and to practice our right to vote as granted by the Constitution – which is also a duty”

The “Consensus for Development” electoral list is backed by Mustaqbal Movement, Jamaa Islamiya and a number of Sidon political and social figures.

MP Bahia Hariri also addressed the rally and said: “We have come a long way in developing Sidon and making it ‘the beautiful Sidon’, just like the martyred premier wanted it to be, and we only have a little left to achieve the dream.”

Also spoke at the rally , head of the electoral list Sidon businessman Mohammed al-Saudi who said: “We’ll do all we can to show the beautiful face of this city and in my name and in the name of all brothers in the list, we thank all of those who contributed to achieving this consensus.”

“We’ll put Sidon’s residents and our neighbors in the Palestinian refugee camps in our hearts and we’ll protect them with our chests,” Al-Saudi added.

“We’re keen on the security of the South because Sidon is the South’s gate,” he said.

Al-Saudi reassured Sidon’s voters that one of the priority items on his list is to resolve the ‘mountain of garbage’ problem.

Earlier today Al-Saudi told LBCI television that reports of tensions as claimed by the rival list ahead of Sunday’s municipal vote are only meant to scare people and drive them away from the polls.

“I toured Saida and I did not see any armed group,” Saudi said.

Earlier today Saad accused his rivals in the Future Movement of recruiting what he called armed groups to stir up trouble in Sidon ahead the city’s elections.

In an interview with LBCI television, Saad said “it is natural for some tension to happen during any elections… but what is happening in Sidon, is an exploitation of this tension by a specific group to serve its election interests.”