Miss USA at Center of Controversy

by yalibnan
1053
US conservative writer, broadcaster and columnist Debbie Schlussel says Rima Fakih should not be Miss USA because of alleged family ties to Hezbollah
Share: 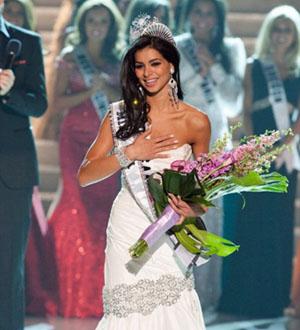 For the first time since it was founded in 1952, the Miss USA beauty pageant has crowned an Arab American as its winner. Rima Fakih, 24, – who was born in Lebanon – has been at the center of controversy since winning the crown. Some say as a Muslim she shouldn’t be in beauty pageants while others say she has every right to wear the crown.

In front of a worldwide television audience on NBC May 16, Rima Fakih was crowned Miss USA. Born in Srifa, Lebanon Rima and her family immigrated to the United States, settling first in New York and later in Dearborn, Michigan. She graduated from the University of Michigan, Dearborn with a degree in economics and hopes to become a lawyer.

Fakih is the first Arab American to win the Miss USA pageant. Rima told VOA that it took her a while to realize that she had won the crown.

But winning the title was just the beginning. Rima Fakih’s family is Shia Muslim, something that does not easily jibe with the public perception of a beauty queen, particularly in the Miss USA pageant, where contestants parade in bikinis.

But Rima – who got involved in pageants to help pay for school – says she doesn’t see that as inconsistent with her family’s faith. “I don’t define myself around religion and my family does not as well. We are Muslim. We respect the religion. We might not be as strict, but we’re not defined by religion but we do spiritually appreciate every religion,” said Miss USA.

One of the people who helped Rima Fakih in her quest is Imad Hamad, the Regional Director and Senior National Advisor for Public Affairs of the American-Arab Anti-Discrimination Committee. He said the fact that Rima is a Shi’ite Muslim should not be an issue – she is a beautiful young woman who deserved to win.

“Faith, race, national origin has nothing to do with that. She was part of this competition,” said Hamad. “She went through it. She passed all the requirements, she is more than qualified. She is beautiful in and out. And she made it. And at the end of the day that’s a pride to all of us as Americans.”

Contestants are judged based on three factors – appearance in swimsuit and evening gown and an interview. Rima had to ask answer a question about whether medical insurance should pay for birth control.

Conservative writer, broadcaster and columnist Debbie Schlussel says Rima Fakih should not be Miss USA because of alleged family ties to Hezbollah, a charge the beauty queen dismisses as groundless and hurtful.

Schlussel told VOA that pageant organizer and real estate developer Donald Trump should never have allowed Rima Fakih to compete. “I’m asking her to condemn a terrorist group that has murdered hundreds of innocent Americans. And if she can’t do that, she really should not be Miss USA. And it shouldn’t be for her to quit, it should be for Donald Trump to fire her,” said Schlussel.

There has also been controversy about photos of Fakih before she was Miss Michigan at a so-called “pole dancing” event in a strip club. Rima is fully clothed and the room is full of women wearing a lot less than she is.

The shots were taken at a promotional event for a friend of hers who works as a DJ at a Detroit area radio station. Fakih said that the photos were taken for fun and were taken out of context when published on the Internet.

For winning the Miss USA title, Rima Fakih gets a custom diamond tiara and jewelry, an apartment in New York for a year and other benefits. She has been invited to visit the President of Lebanon, where the Miss Lebanon pageant is apparently as big as the U.S. National Football League’s Super Bowl. So far, she hasn’t been invited to the White House.

Rima Fakih next competes in the Miss Universe Pageant – again in Las Vegas – in August.