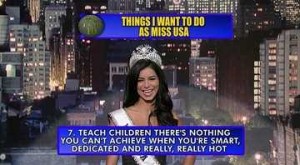 The newly crowned Miss USA, Rima Fakih put controversy behind her as she appeared on “The Late Show with David Letterman,” to present the show’s iconic Top 10 List on Tuesday night.

Fakih was the focus of a media frenzy just 24 hours after winning the national title in Las Vegas on Sunday, when photos blanketed the Internet of her dressed in a T-shirt and short red shorts from a women-only 2007 stripper class and radio station contest.

The 24-year-old from Dearborn walked on the “The Late Show” stage as Paul Shaffer and the CBS Orchestra played Prince’s song, “Most Beautiful Girl in the World.” She was dressed in a flattering black dress and pageant sash, flashing a bright smile and wearing an even brighter tiara.

Letterman asked where Dearborn was located, about Ford and her living-large tiara.

Fakih delivered the list that was tailored just for her titled, “Things I Want to Do As Miss USA,” with perky beauty pageant nerve and focus.

And what things did Miss USA plan to do?

10. Fill in as Secretary of State whenever Hillary Clinton is on vacation.

9. Visit the Trump Taj Mahal in Atlantic City and steal as many towels as I can.

6. Spend my prize money on Mountain Dew and chalupas.

5. Travel to Neptune for the Miss Universe Pageant.

4. I will personally make every American a fried egg sandwich.

3. Like every gal, I dream of meeting a hunky close-up magician.

2. I honestly have no idea what I am supposed to do.

1. Nice things for the elderly, which is why I’m visiting Dave.

Following the Top 10 List, Letterman gave Fakih red roses, kissed her hand, and said, “Have a lovely reign.” To which Fakih, said “Dad, I am with Dave.”