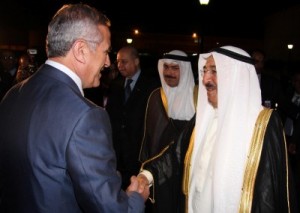 While in Lebanon the Kuwaiti Emir was showered with praise everywhere he went.

Earlier today Prime Minister Saad Hariri’s press office issued a statement praising Kuwait’s role in safeguarding Lebanon’s stability and ensuring its development during a dinner hosted by Hariri in honor of the Kuwaiti Emir at the Grand Serail.

“The Lebanese will not forget Kuwait’s commitment to rebuild Lebanon after signing the Taif Accord,” said Hariri.

Sabah, in turn, said that Kuwait and Lebanon enjoy strong relations that he called for enhancing by cooperating on the economic, trade and cultural levels.

The Emir also said: “We appreciate the tangible efforts and Lebanon’s blessed steps on the path of development, reconstructing what was destroyed by the Israeli wars and overcoming them as well as executing these ambitious developmental projects. In this regard, we underline Kuwait’s support to the Lebanese Republic, and its contribution to the financing of many developmental projects, wishing Lebanon continuous security and stability, and further development, progress and prosperity.”

The Kuwaiti Emir responded by reiterating his support for Lebanon .

Skeikh Sabah said his series of meetings with Lebanese officials will enhance bilateral relations, especially in areas of investment and economic matters. He said he supports financial projects in the country.

Lebanon’s current political stability is valued by everyone, he added.

The Emir recalled that Lebanon was among the first nations to condemn the Iraqi occupation of Kuwait.

Last night the Lebanese president hosted a state dinner in honor of the Emir at the Baabda presidential palace. He too praised Kuwait for its support for Lebanon

Lebanon and Kuwait signed a string of economic, cultural and medical agreements during the Emir’s visit .

The pacts included one to establish a high-level commission on political and economic matters.

Kuwait Fund for Arab Economic Development (KFAED) said the agreements would strengthen and develop relations between the two countries.