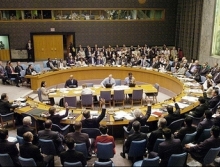 The United States and its Western allies won crucial support from Russia and China for new sanctions against Iran over its suspect nuclear program, but they now face a tough campaign to get backing from the rest of the U.N. Security Council.

The draft resolution, obtained Tuesday by The Associated Press, would ban Iran from pursuing “any activity related to ballistic missiles capable of delivering nuclear weapons,” freeze assets of nuclear-related companies linked to the Revolutionary Guard, bar Iranian investment in activities such as uranium mining, and prohibit Iran from buying several categories of heavy weapons including attack helicopters and missiles.

It would also call on all countries to cooperate in cargo inspections — which must receive the consent of the ship’s flag state — if there are “reasonable grounds” to believe these activities could contribute to Iranian nuclear activities.

On the financial side, the draft calls on — but does not require — countries to block financial transactions, including insurance and reinsurance, and ban the licensing of Iranian banks if they have information that provides “reasonable grounds” to believe these activities could contribute to Iranian nuclear activities.

The agreement appeared to be a significant victory for the Obama administration, which has doggedly pursued sanctions since Iran rebuffed U.S. overtures last year. Iran has insisted its nuclear program is for peaceful purposes.

Russia and China, which have close ties to Iran and could veto any resolution, joined fellow permanent council members Britain, France and the United States as well as non-member Germany in supporting the sanctions proposal.

Both Russia and China resisted sanctions before they were persuaded to support the stepped up pressure on Iran in recent weeks. Proposed sanctions relating to Iran’s oil and gas industry were removed due to opposition from the two countries, which have vast investments and interests in Iran’s energy sector.

Russia’s U.N. Ambassador Vitaly Churkin said the final draft is acceptable because it is “focused adequately on nonproliferation matters” and doesn’t cause “humanitarian damage” or create problems for normal economic activities in Iran and the country’s economic relations with other countries.

The Russian Foreign Ministry said Lavrov “expressed anxiety” in his talk with Clinton about reports that the United States and European Union might undertake unilateral sanctions against Iran beyond measures agreed to by the Security Council.

At least three of the 10 non-permanent Security Council members — Brazil, Turkey and Lebanon — have expressed opposition to new sanctions.

The U.S. introduced the draft sanctions resolution at a closed council meeting Tuesday but Brazil announced afterwards that that it won’t even discuss it “at this point” because it wants to focus on the nuclear swap agreement that Iran signed Monday with Brazil and Turkey.

The deal would take 1,200 kilograms, about 2,600 pounds, of low-enriched uranium out of Iran for a year and return higher-enriched uranium for a medical research reactor in Tehran. That’s the same amount as under a tentative October agreement negotiated by the U.S., Russia, France and Iran and endorsed by the International Atomic Energy Agency.

Brazil’s Foreign Minister Celso Amorim conceded that the agreement did not solve all the problems posed by Iran’s nuclear program, which the West suspects could lead to the development of nuclear weapons, but he argued it lays the groundwork for a peaceful solution to the dispute.

“I am optimistic about the results,” he said in Brasilia.

U.S. Ambassador Susan Rice insisted, however, that the pursuit of new sanctions has “nothing to do with” the proposed nuclear swap. The October proposal was presented as a “confidence-building measure” not as a solution to Iran’s nuclear standoff, she said.

Rice stressed that Iran has taken new actions since October and even after Monday’s agreement the government announced that it still planned to enrich uranium to 20 percent. That “not only eliminates any confidence-building potential” but intensifies Iran’s violation of existing U.N. sanctions, she said.

The draft resolution is targeting Iran’s repeated refusal to suspend its uranium enrichment program and decision to build 10 new nuclear facilities, Rice said, and it would give “greater teeth” to existing sanctions and add “strong” new measures to intensify pressure on the Iranian government to resolve concerns that its nuclear program is peaceful and not aimed at producing nuclear weapons.

While Rice acknowledged the efforts of Brazil and Turkey, China’s U.N. envoy Li Baodong called their agreement with Iran “a very important diplomatic step” which should be welcomed and followed by stepped up diplomatic activity to address Tehran’s nuclear program.

Churkin, the Russian ambassador, also expressed appreciation for the initiative taken by Brazil and Turkey and “hope that this matter can be pursued and successful.”

“We hope if that positive momentum is there, it can be reinforced on other tracks,” he said, including strengthened Iranian cooperation with the IAEA and starting Iranian talks with the six powers.

After presenting the draft to the non-permanent council members, Rice said the U.S. will work hard to win support from as many members as possible.

She said she is confident the resolution will get the minimum nine “yes” votes without a veto needed for adoption by the 15-member council, but the final tally remains uncertain. Key council diplomats have said repeatedly that a high level of approval is crucial to send a strong message to Iran.

Rice said the U.S. considers new sanctions “urgent” but wouldn’t speculate on when the resolution will be put to a vote.

The 10 countries elected to two-year terms almost certainly sent the draft to their capitals for examination. Experts from the 15 council nations will then start negotiations, which could take time. The six powers must also agree on the proposed individuals and companies from the Revolutionary Guard and other bodies to be added to a list of those subject to a freeze of their financial assets and travel ban for their nuclear links.

“These sanctions would also have an immediate chilling effect on Iran’s ability to move forward with its nuclear and ballistic missile program as well as its ability to threaten its neighbor,” she said.

But panelists at a symposium Tuesday sponsored by the Nixon Center, a Washington think tank, said they doubted U.N. sanctions would deter Iran.

“This policy is unlikely to succeed,” said former U.N. weapons inspector David Kay. “The real question is what if sanctions fail? What are we to do?” AP

Richard Perle, a former Pentagon official, said he doubted sanctions would be effective in stopping Iran and recommended the U.S. back the Iranian opposition as a way of pressing regime change.