Miss USA ‘scandal’ is just a lot of smoke and noise

by yalibnan
1247
On Sunday night, Rima Fakih was crowned Miss USA, but by yesterday morning she was outed as the past winner of another kind of ... pageant.
Share:

On Sunday night, Rima Fakih was crowned Miss USA, but by yesterday morning she was outed as the past winner of another kind of … pageant. One involving a pole. A stripper pole. Back in 2007, the 24-year-old competed in a local radio show’s “Stripper 101” contest and her win this past weekend has stirred up photos of her working the pole. Now, according to the website of the radio show in question, Mojo in the Morning, the show’s producers “have been contacted by representatives of Miss Universe requesting more photographs and information regarding Fakih’s involvement in the ‘Stripper 101’ contest. When asked if Fakih’s status as Miss USA was in danger, pageant representatives would not answer.”

You know what this all means: Summon the outrage and prepare to shame — it’s time for Miss USA’s annual sexy photo scandal.

The 24-year-old may be the first Arab-American to win the Miss USA title, but plenty of beauty queens have walked the stage of sexual shame before. Last year, topless shots emerged of former contestant Carrie Prejean, and the anti-gay-marriage conservative narrowly escaped the leak of a sex tape. Before her, there was Miss USA Tara Conner who courted major controversy by reportedly boozing while underage, doing drugs and kissing Miss Teen USA Katie Blair in public, and Miss Nevada Katie Rees, who lost her title after the emergence of a hardcore pornographic photo shoot. 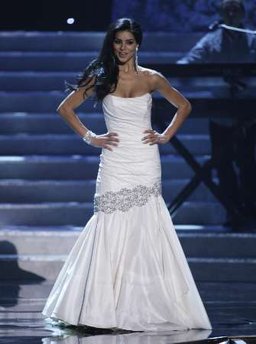 What’s absurd about this scandal is that the photos of Fakih pole dancing are far tamer than the official Miss USA glamour shots. As Mary Elizabeth Williams wrote in Salon last week, it seemed pageant officials were “heading scandal off at the pass” by releasing a “spank-worthy collection of its contestants in lingerie.” Fakih is wearing less clothing in her glamour shot, seen above, than in her pole-dancing pics — we’re talking fishnets, a garter and a bra compared to a tank top and booty shorts. (Visit mojointhemorning.com to see the relatively tame “Stripper 101” images.) In all seriousness, you’re likely to see racier getups on suburban soccer moms at their local strip aerobics class. It seems we’re really just going through the motions here. The beauty queen’s fall from grace has been institutionalized and main-streamed. The post-win scandal is now as every bit an expected and essential part of the pageant as the swimsuit portion of the show. It’s all so predictable and boring. Could it be that we’re nearing maximum sex scandal capacity?