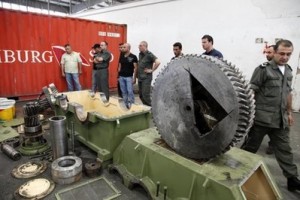 Lebanese Customs thwarted a major drug smuggling operation through Beirut port acting customs chief Shafiq Merhi said during a press conference on Monday. “Drugs were hidden in a cable car cabin”, which was imported from southern Colombia and passed through Antwerp, Belgium, before reaching Beirut 16 days ago on May 1, 2010.

“There were almost 103 kilograms of pure cocaine amounting ten million dollars to be tripled upon procession to make it usable”, he added.

Merhi said a 79 year old man was arrested for smuggling the drugs, saying: “It is clear that he has accomplices and investigations are underway to arrest them.”

Photo: Lebanese customs stand near a machine where smuggled cocaine was hidden, displayed at the port of Beirut, Lebanon, Monday, May 17, 2010.