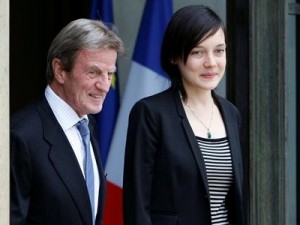 A young French academic who battled spying charges in Iran for more than 10 months returned to France Sunday and thanked thanked President Nicolas Sarkozy and other officials for insisting on her innocence and pressing for her release.

Clotilde Reiss, 24, was accused of joining protests, gathering information, taking photos and sending them abroad during unrest that broke out after June’s disputed presidential elections in Iran.

She was convicted of provoking unrest and spying, but her lawyer said the 10-year jail term was commuted to a fine of 3 billion rials ($300,000). He said he paid the fine on Saturday.

The case, which became a cause celebre in France, put extra strain on the already tense relations between the two countries. France has taken a tough stance on Iran’s nuclear ambitions.

Officials in both countries denied widespread speculation that Reiss’ return home was part of a tit-for-tat deal involving two Iranians held in France — one of whom was allowed to return to his homeland a little over a week ago.

A government plane carrying Reiss touched down at the Villacoublay air base near Paris early Sunday afternoon. After being welcomed at the Elysee Palace by President Nicolas Sarkozy, Reiss thanked her supporters, including Sarkozy, “who proclaimed my innocence as soon as I was arrested.”

Reiss also said her thoughts were with two Iranian men who were part of her mass trial and who were executed in January.

Reiss was arrested July 1 and jailed after attending a postelection demonstration at the end of a five-month teaching job in the city of Isfahan. She was released on bail after a month and a half in Iran’s dreaded Evin prison, but only on condition that she stay at the French Embassy in Tehran until her trial was over.

She was among more than 100 politicians, journalists and activists accused of trying to engineer a “velvet revolution” to overthrow Iran’s Islamic leadership. She pleaded not guilty. At one point during the trial, Reiss apologized to the court for attending a demonstration but said she did so because she was curious.

Reiss’ return came a week and a half after Iranian Majid Kakavand was permitted to leave France and return to Iran. He had been detained in France on a U.S. warrant accusing him of evading export controls to purchase technology over the Internet to sell to Iran’s military.

The United States had been seeking Kakavand’s extradition, but a French court rejected the request May 5.

Iran’s Foreign Ministry spokesman, Ramon Mehmanparast, was quoted by the semiofficial Fars news agency as saying there was no link between the cases of Kakavand and Reiss.

Kouchner told Radio J that there was “no bargaining” relating to the Kakavand case, nor to a French court’s upcoming decision on whether to free Ali Vakili Rad, who was convicted of assassinating former Iranian Prime Minister Shahpour Bakhtiar at his home outside Paris in 1991. That decision is expected Tuesday. AP