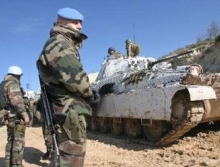 The United Nations Interim Force in Lebanon (UNIFIL) is looking into yesterday’s accidental explosion which resulted in the injuries of several peacekeepers.

The incident occurred during routine activity at one of the mission’s positions in the country’s south.

UN spokesperson Martin Nesirky told reporters in New York today that preliminary reports point to the accidental detonation of munitions as being behind the accident.

One soldier who sustained serious injuries in the incident was evacuated for medical treatment, and is in stable condition.

In 2006, the Security Council adopted Resolution 1701, which expanded UNIFIL – currently around 13,000 military personnel – and called for an end to hostilities, respect for the so-called Blue Line separating the Israeli and Lebanese sides, disarming militias including Hizbollah, and an end to arms smuggling. UN