by yalibnan
892
“The true hypocrite is the one who ceases to perceive his deception, the one who lies with sincerity.” – André Gide
Share: 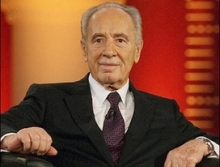 The international community has long been enamored by current Israeli President and former Prime Minister, Shimon Peres. Regarded as a voice of reason and a dove among hawks, he adroitly assuages fears and reassures critics with soothing, yet empty words advocating dialogue and the creation of a Palestinian state. By duping the world into believing significant differences exist between his “left wing” views and those of Israel’s far right, he has proven himself a master at deception.

Peres was at it again this past week after he attended Victory Day celebrations in Moscow and met with President Dmitry Medvedev prior to the Russian leader’s first official visit to Damascus. Peres did not miss the opportunity to reiterate the spurious claims of Scud missiles being transferred into Lebanon while paradoxically emphasizing that Israel had no interest in escalating tensions with Syria.

Before the United States-mediated “proximity talks” were launched, he also told U.S. Mideast envoy George Mitchell that Israel’s “security issues” should take precedence in the negotiations, “especially against the background of the [Israeli] army’s withdrawal from Gaza and the evacuation of settlements at the end of which thousands of rockets were fired at Israeli communities.”

Harkening back to Israel’s withdrawal from occupied Gaza at the end of 2005, Peres neglected to mention what Israel subsequently did to the most densely-populated area on earth. After democratic, free and fair parliamentary elections were held in January 2006 (which gave Hamas the majority of seats in the Palestinian Legislative Council), Israel hermetically sealed its borders.

When it became clear that the Fatah faction of Palestinian Authority President Mahmoud Abbas—upon whom the Israelis came to depend as a pliable, quisling leader in the West Bank—would no longer be ruling Gaza, an appalling, inhumane siege was imposed on the tiny enclave. Basic humanitarian supplies such as food, fuel, electricity, clean water, cooking oil, clothing and medicine were prevented from entering. It was an egregious form of collective punishment, which under the 1949 Geneva Convention, is considered a war crime. Peres, the Nobel laureate, had no moral compunctions about it.

The crippling embargo continued for 18 months. With growing child malnutrition and the increasingly desperate plight of Gazans, is it any surprise that those held captive in the open-air prison—with dwindling supplies of food and clean water—might launch crude, unguided rockets at their captors? In fact, it was usually done only in response to military provocations by the Israel Defense Forces (IDF). Compared with the sophisticated weaponry of the IDF, the fertilizer-based, home-made rockets were mere catapults; Israel had not recorded a single casualty from them in the year prior.

The savagery of Israel’s December 2008 attack on Gaza, which saw the use of illegal white phosphorus shells and witnessed the deliberate targeting of civilians (many waving white flags), United Nations food-storage facilities, mosques, schools, bridges, ambulances, police stations, and in effect the entire civilian infrastructure, does not need repeating. The reports of U.N. Special Rapporteur on Human Rights in the Palestinian Territories, Richard Falk, and Judge Richard Goldstone, head of the U.N. Fact-Finding Mission on the Gaza Conflict, suffice.

Needless to say, the aftermath was catastrophic: more than 1,400 killed—the vast majority civilians and a third children; 100,000 displaced; 500,000 with no access to clean water, 4,000 homes totally destroyed and 45,000 damaged; 1,500 destroyed factories and commercial buildings as well as 50 U.N. facilities (including four schools), and nearly 50 percent of agricultural land laid to waste (from the Palestinian Central Bureau of Statistics, the Palestinian Centre for Human Rights and various NGOs, February 2009 figures).

The Israeli blockade persists, with some “relaxation” of restrictions. In March, for the first time in three years, Israel allowed 10 trucks carrying shoes and clothes into Gaza. Reconstruction materials, children’s crayons and books remain prohibited.

Peres’ demand that Israel’s “security” be made the focal point of indirect talks “especially against the background of the army’s [2005] withdrawal from Gaza” is absurd and insulting; as if the implied munificence of dismantling illegal settlements suffices so as to overlook war crimes committed in the following years. What “security” remains to be safeguarded when Gaza’s Palestinians continue to be in need of adequate food, shelter and clothing?

The audacity of invoking Gaza to illustrate Israel’s security needs aside, Peres remains a constant source of misinformation and obfuscation.

He has become Israel’s most vocal propagandist of the unsubstantiated allegation that Syria has transferred Scud missiles to Lebanon. He also persists in hyping the purported threat of Iran’s nascent nuclear energy capability while refusing to entertain any notion of Israel joining the Nuclear Non-Proliferation Treaty itself.

Indeed, Peres is the architect of Israel’s nuclear weapons program.

In 1953, Israeli Prime Minister David Ben Gurion appointed the young Peres to become Director-General of the Ministry of Defense. During meetings convened to draw up the 1956 Protocol of Sèvres, Peres enlisted France’s help in constructing the Negev Nuclear Research Center.

His critical involvement in developing Israel’s nuclear capability was detailed in the book “Shimon Peres—The Biography” by historian Michael Ben-Zohar. According to Reuters, “The book divulges … details of how Peres served as a behind-the-scenes architect of Israel’s military might, securing weapons secretly and buying an atomic reactor from France.”

Thanks to Peres, and many decades before Iran enriched one gram of uranium, it was Israel that first introduced nuclear weapons into the volatile Middle East.

The massacre at Qana

During Israel’s 1996 “Grapes of Wrath” campaign in Lebanon and under the watch of Prime Minister Peres, the Qana massacre occurred.

At a U.N. compound near the village of Qana, 800 Lebanese civilians sought refuge from the fighting. Showing utter disregard for both the U.N. and the civilians they sheltered, the IDF shelled the compound, killing 106 innocents and injuring more than 100.

A U.N. investigation concluded it was unlikely that the shelling was due to gross technical or procedural errors, as Israel had first claimed. After constantly shifting explanations, Peres justified the attack by blaming Hezbollah, using the tired and discredited “human shield” excuse. Other investigations were more forthright: an Amnesty International inquiry found that the attack was “intentional and is condemned.” Similarly, Human Rights Watch’s report stated, “We have declared this a massacre that was intentional using very highly accurate missiles and explosives.”

Middle East analysts who appreciate Israel’s expansionist, neo-colonialist nature realize that the country’s major political parties—whether Likud, Labor, Kadima—all are advocates of, or apologists for the settlement and expropriation of Palestinian land, the expulsion of its inhabitants, and deliberately exacerbating tensions with neighboring countries.

Although Peres’ role in these endeavors is often likened to that of a wolf in sheep’s clothing, astute observers of his career are not fooled. They see a wolf without disguise. counterpunch