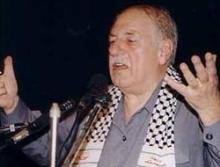 LBC has reported that residents of central Beqaa have witnessed today war games at the Qousaya base of the Syrian backed Palestinian militants PFLP-GC in which anti aircraft arms were used in addition to other heavy weapons.

The Popular Front for the liberation of Palestine- General Command is headed by Ahmad Jibril a former captain in the Syrian army . Jibril refuses to hand over his arms to the Lebanese army .

In an interview with al-Jazeera TV last December , Jibril said his group will not surrender its weapons to the Lebanese army and urged the Lebanese government to address Palestinian refugee issues first.

“After the Palestinians in Lebanon feel assured of their wellbeing, we will then discuss security issues,” Jibril said.

Today marked the 62nd anniversary of the Nakba, the “catastrophe” when about 750,000 Palestinian Arabs were expelled from their homes. One observer told Ya Libnan: “Jibril is in the wrong place”.

He added: “Syria has been arming all the militant Palestinians and sending them to Lebanon even though not one shot was fired at the Israeli army in the occupied Syrian Golan heights during the past 35 years”.