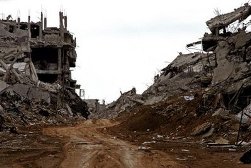 U.S. Ambassador to Lebanon Michele Sison on Wednesday announced a new $20 million donation for the reconstruction of the Nahr al-Bared Palestinian Refugee camp in North Lebanon.

At a ceremony at the UNRWA Field Office in Beirut, Sison commended “the strong cooperation between UNRWA, the government of Lebanon, their many partners, and the Palestinian refugee community, as the reconstruction of the camp and surrounding areas moves forward.”

“The United States remains committed to supporting these vital partnerships, with each component — the Lebanese, the Palestinians, the U.N., and the international community — each contributing to ensuring that the critical needs of Palestinian refugees and Lebanese civilians affected by the fighting are met, until the process of reconstructing Nahr al-Bared camp is complete,” Sison added.

According to a statement issued by the U.S. Embassy in Beirut, $18 million from the donation will be used in the physical reconstruction of the Nahr al-Bared camp. The remaining $2 million will go towards relief and recovery support, which will allow UNRWA to continue providing essential health, relief, housing and education services to the displaced refugees until they can return to the reconstructed camp.

“The United States is the largest bilateral donor to UNRWA, with the total U.S. contribution to UNRWA for 2010 now reaching $115 million. This donation brings the total United States contribution for the Nahr al-Bared project to $91.8 million since 2007: $66.5 million for reconstruction and $25.4 million for relief assistance, including for the construction and equipping of a temporary health center in the area adjacent to the camp,” added the statement of the embassy.

Nahr el Bared camp was destroyed in 2007 during a 106 day battle between the Lebanese army and Fatah al Islam terrorists . The battle started on May 19 and ended on Sunday September 2, 2007 with the Lebanese Army taking full control of the camp after eliminating terrorists surrendered and fled . Naharnet / Ya Libnan