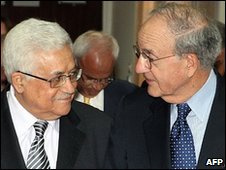 Mr Mitchell will now shuttle between the two sides, with hopes that direct talks can start within four months.

The start of indirect talks in March was halted by a row over the building of new Israeli homes in East Jerusalem.

Palestinians broke off direct peace talks after Israel launched a military offensive on Gaza in late 2008.

“The proximity talks have started,” Mr Erekat said in the West Bank city of Ramallah, with Mr Mitchell standing beside him.

Mr Mitchell will shuttle between the Israeli and Palestinian leaders to try to narrow their differences on the terms of Palestinian statehood.

He has already held several meetings with Mr Abbas and Israeli Prime Minister Benjamin Netanyahu in the past week.

Mr Netanyahu said on Sunday that he hoped the indirect talks would quickly move to direct negotiations.

“Peace cannot be brought about from a distance, or with a remote control,” he told a meeting of the Israeli cabinet.

“We are neighbours of the Palestinians and they are our neighbours. Over time one cannot assume that that we will reach decisions and agreements on critical issues such as security and our national interests and their interests if we don’t sit in the same room.”

But as the talks got under way, there was scepticism from Israelis and Palestinians.

“Proximity talks – we did it 15, 20 years ago, so I don’t see anything new,” said Tomer Haramati, a Jewish resident of Jerusalem.

In Ramallah, Palestinian Sobhi Tabenjh agreed: “These negotiations are like the ones before. We move one step forward and one step back.”

The talks went ahead a day after receiving the backing of the Palestine Liberation Organisation.

The PLO’s Executive Committee decided to back the talks after a three-hour meeting in the West Bank.

However, the Palestinian Islamist group, Hamas, which controls the Gaza Strip, had urged the PLO to reject the talks.

“We warn the executive of PLO not to take any decision to resume talks with the enemy and to give cover to the Israeli occupation to commit more crimes against our people,” a statement said.

Palestinians pulled out of talks in March after Israeli municipal authorities approved plans for new homes in the East Jerusalem settlement of Ramat Shlomo.

The announcement was made during a visit to Israel by US Vice-President Joe Biden and caused great strain in Israeli-US relations.

The Palestinian Authority’s formal position is that it will not enter direct talks unless Israel completely halts building in the West Bank and East Jerusalem.

In November, Israel announced a 10-month suspension of new building in the West Bank, under intense US pressure.

But it considers areas within the Jerusalem municipality as its territory and thus not subject to the restrictions.

Israel has occupied the West Bank, including East Jerusalem, since 1967. It insists Jerusalem will remain its undivided capital, although Palestinians want to establish their capital in the east of the city.

Nearly half a million Jews live in more than 100 settlements in the West Bank, among a Palestinian population of about 2.5 million.

The settlements are illegal under international law, although Israel disputes this. BBC