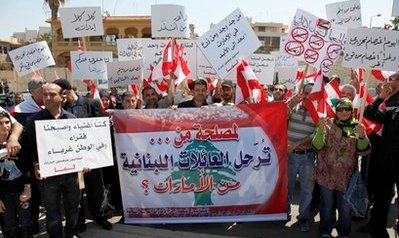 Lebanese citizens who have been deported last year from United Arab Emirates (UAE), hold placards written in Arabic, with poster at center, reading ‘Who benefits from the deportation of Lebanese families from Emirates?’ as they protest in front the Emirates embassy, in Beirut, Lebanon, on Wednesday May 5, 2010. A Lebanese deported businessman alleged that he and several hundred other Lebanese were expelled from the United Arab Emirates because they refused to spy on the Shiite militant group Hezbollah and other fellow citizens.

The protesters who were reportedly expelled from the United Arab Emirates 10 months ago said during the protest that they “suffered more than $25 million of losses” .

“We have suffered losses worth more than $25 million,” head of the committee following up the issue, Hassan Alyan, told As Safir daily in remarks published Thursday.

Reports from Abu Dhabi had said that the UAE expelled scores of long-term Lebanese Shiite residents from the country over their presumed affiliation with Hezbollah.

The protesters  held one poster reading: “We were rich, we became poor and strangers in our country.”

Another poster read: “We hold fully responsible the security apparatuses of Abu Dhabi and the Lebanese state.”

Alyan threatened that demonstrators would set up tents outside the UAE embassy to hold a “symbolic” protest. “We will not leave until our demands are met,” he told As Safir.

The protesters said in a statement that the UAE should “stop aggressions and immoral practices against many Lebanese citizens who are being targeted by the worst types of moral and sometimes physical terror.”

After several attempts to hand over a protest letter to the embassy, officials prevented them from entering the mission’s premises.

One observer who refused to be named told Ya Libnan” I am sure the majority of the deported Lebanese are innocent and  have nothing to do with Hezbollah but  unfortunately the Lebanese expatriates always end up paying the price which  is grossly unfair  “. He added: ” You have to remember that Iran to UAE is like Israel to Lebanon :  Just like Israel occupies Shebaa, Iran continues to occupy three  UAE  islands” . He added : Hezbollah’s backing by Iran coupled with the alleged involvement of Hezbollah in Iraq, Yemen, Egypt and Kuwait , raised a lot of suspicion within the Arabian  Gulf countries “