Analysis: Are Lebanon and Israel Headed for Another War?

by yalibnan
414
Is Lebanon headed for another war with Israel? King Abdullah of Jordan recently issued an ominous warning about a potential conflict this summer.
Share: 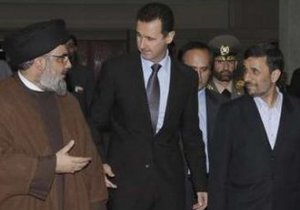 Is Lebanon headed for another war with Israel? King Abdullah of Jordan recently issued an ominous warning about a potential conflict this summer. And just last week U.S. Defense Secretary Robert Gates said that Hizbullah’s increasing stock of rockets and missiles is destabilizing the region. The potential flash point: reports that Syria and Iran are passing Scud missiles to Hizbullah. Israel says that the missiles, which would put Jerusalem within striking range, are a game changer. Lebanese security officials counter that Scuds are impractical for a nimble fighting force like Hizbullah.

Analysts say the dispute is really about a bigger issue: U.S. engagement with Syria. With relations between the U.S. and Israel at a new low, Lebanon suspects that hawks in Washington and Tel Aviv are trying to torpedo the recent U.S. diplomatic outreach to Damascus. Still, while Syria has given the U.S. positive signals, it’s not exactly rushing to cut off regional allies–as evidenced by the meeting between Syrian President Bashar al-Assad ( pictured (C) , Hizbullah leader Hassan Nasrallah (L) , and Iranian President Mahmoud Ahmadinejad (R) in February. That meeting sent a clear message that an Israeli attack on Hizbullah could easily spill over into a broader regional conflict. Both sides are flexing their muscle: Israel has ramped up provocative overflights of Lebanese territory in recent months, and Iran has carried out missile tests and even a series of massive war games in the Persian Gulf. And Hizbullah hasn’t denied receiving Scud missiles. In a tinderbox like Lebanon, such rumors could produce deadly results.