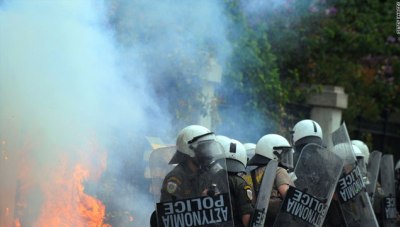 Police sirens and the smell of tear gas filled the streets around Greece’s parliament building Wednesday after protests against government spending cuts turned violent, then deadly.

Three people died and four others were trapped when a fire bomb hit a bank in central Athens, the Greek fire brigade told CNN. The victims, two women and a man, were bank employees, they said.

Bins and cars were set on fire around the city. Two public buildings were on fire and a fire truck was ablaze near the Temple of Zeus, the fire brigade said.

Riot police in helmets and shields kept back protesters who threw bottles, sticks, and rocks. Booms pierced the air every time the police fired canisters of tear gas at the crowds.

A mass of protesters made it onto the steps in front of the Greek parliament building early in the afternoon before riot police pushed them back.

Members of the parliamentary economic committee are inside the building reviewing a package of austerity measures to contain Greece’s spiraling debt. The measures are highly unpopular in Greece and the protesters on the steps demanded that the lawmakers come outside and face them.

The protests happened amid a general strike by thousands of public sector workers unhappy with the austerity measures, which largely target them. Private sector workers joined them on the picket lines Wednesday, along with thousands of transport workers — which brought transportation services to a halt.

Police estimated there were 15,000 workers were on the streets of Athens, but unions said there were many more. Among them were teachers, bank employees and doctors.

Throughout the capital, about 1,700 officers stood guard to maintain order.

The workers are protesting cuts in spending that the government says are needed to pull the country out of debt.

What are the protest about?

The Greek Parliament is expected to vote on the austerity measures — which include wage freezes and higher taxes — by the end of Thursday.

The Finance Ministry said the austerity bill goes before a parliamentary committee Wednesday and will be up for debate by the whole body the following day.

Tuesday, about 2,000 protesters representing teachers from the public sector marched past the Finance Ministry and Parliament.

In central Athens, protesters threw plastic bottles and sticks at riot police. At another demonstration, members of the Communist Party of Greece (KKE) erected large banners near the Parthenon. “People of Europe Rise Up,” said one.

The package includes a promise by Greece to cut its budget deficit to 3 percent of the country’s gross domestic product, as required by European Union rules, by 2014, according to Papaconstantinou.

The measures, he said, were needed for Greece to secure its financial lifeline.

Greece has a choice between “destruction” and survival, and “we have chosen, of course, to save the country,” Papaconstantinou said.cnn