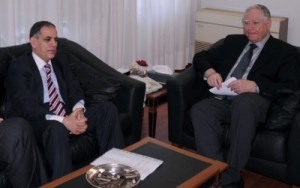 Lebanese Justice Minister Ibrahim Najjar on Tuesday met with Mohammed Abdul Hakam, Egypt’s Assistant Foreign Minister for Consular Affairs and Egyptians Abroad to extending his apologies for the lynching of the Egyptian national in Ketermaya.

After the meeting, Najjar noted that the appropriate measures will be taken away from media coverage and that the issue is being followed up by the Prosecutor-General’s Office which will handle the issue “with all due seriousness.”

Najjar stressed that he was not officially assigned by the Cabinet to extend the apology, adding that the Cabinet surely backs him on that.

Bidawi emphasized there was no connection between this criminal affair in Lebanon and the Egyptian court case.

Bidawi described Egypt’s relationship with Lebanon as good and commended the cooperation of Lebanese authorities with the Egyptian embassy in investigating Mosallam’s murder, saying it reflected their awareness of the event’s negative effect on Lebanon’s image.

Mosallam was murdered by a mob of villagers last Thursday in the Iqleem al Kharroub town of Ketermaya, after being accused of killing four members of a local family.

“The results of the DNA tests proved that Mosallam was the murderer, “the National News Agency said Friday.

National News Agency said Mosallam shot to death Youssef Abu Merhi, 75, and his wife Kawthar, 70, along with their grand children Zeina, 7, and Amneh, 9.