UN envoy rules out possibility of war between Lebanon and Israel 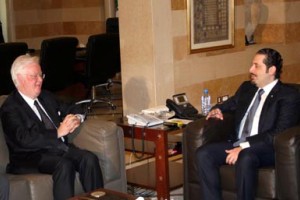 Following his talks with Lebanese Prime Minister Saad Hariri at the Grand Serail, U.N. Special Coordinator for Lebanon Michael Williams on Wednesday ruled out the possibility of war between Lebanon and Israel stressing it was in the interest of all parties to abide by Security Council Resolution 1701.

“I don’t believe there will be (war). I think there is too much at stake to lose for all the parties,” Williams said . He added: “I think tensions have been high the last few days. But I hope that those will lower now.”

When asked if he believed Hezbollah had Scud missiles, he said: “I cannot make an assessment on that issue. What is important for me is Resolution 1701 because I think that is the key to peace.”

He added the resolution states clearly that any transfer of arms to Lebanon should only be through the government.

Williams said he discussed with Hariri the tension that rose as a result of allegations and counter-allegations made in recent days over the alleged Syrian transfer of Scud missiles to Hezbollah.

“I commended Prime Minister Hariri for his efforts to reduce tension and especially his visit yesterday to Sharm el-Sheikh to meet with President (Hosni) Mubarak of Egypt,” the U.N. official said.

“I am convinced that it remains in the interest of all parties to abide by Resolution 1701 and to preserve the cessation of hostilities,” he told reporters.

Williams added that he expected all parties to maintain stability in the south and across the U.N.-drawn Blue Line.

Israel is concerned that Indonesia could take up command of UNIFIL’s naval force, making it difficult for the IDF and particularly the Israel Navy to maintain a high level of coordination with the peacekeeping force, according to Jerusalem Post.

Italy is currently in charge of the UNIFIL Maritime Task Force and is reportedly scheduled to step down from command in June and Indonesia is reportedly being considered as one of the possible candidates to command the naval force.

Israel’s concern is that if Indonesia takes command of the force, coordination and ties will deteriorate, since Israel and Indonesia do not have formal diplomatic or military relations, the Israeli newspaper Jerusalem Post has reported adding that IDF fears that European countries may pull out of UNIFIL.