Iran sanctions: A Dilemma in June?

by yalibnan
448
The Lebanese are concerned because Washington wants to put forward a new Security Council resolution for sanctions against Iran as soon as possible.
Share: 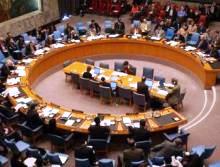 The Lebanese are concerned because Washington wants to put forward a new Security Council resolution for sanctions against Iran as soon as possible. Just by putting forward sanctions in May will mean that Lebanon, which will assume presidency of the Security Council, must make a big decision; either it will surrender Tehran to the noose of sanctions or it will abstain from voting. Tehran, Damascus and Hezbollah would not accept this and would not be satisfied with anything less than rejecting the resolution.

Washington’s declared position is one of calm. The Americans are ruling out the possibility that Lebanon will obstruct the sanctions resolution; however I received information stating the contrary to the effect that there is serious consideration in Washington to get through May and put forward the sanctions [resolution] in June when presidency of the Security Council will be passed on to Mexico in order to avoid embarrassing Lebanon. An intelligent person advised some people in Lebanon to follow Turkey’s lead; if Turkey abstains from voting then Lebanon should too, if Turkey votes then Lebanon should vote too, but some people in Beirut are saying that the pressure coming from Iran is immense, not to mention Hezbollah and Damascus. Nevertheless, whoever looks back at recent history will find that Lebanon has no reason to be embarrassed, especially if the Lebanese act in the same way as Syria did in 2002 when it voted for the “final opportunity” project, i.e. Resolution 1441 that was presented to the Security Council by Washington and was supported by Britain. This is the resolution that offered Iraq the final opportunity to comply with its disarmament obligations in accordance with [previous] Security Council resolutions. Why did Syria at the time vote for the resolution that gained unanimous consensus against Iraq, and yet today it rejects voting on the sanction resolution against Iran and in fact considers this treason? Iran is not an Arab country and is not one of Lebanon’s neighbors and it does not have the rights that Iraq has.

What’s important here is that no matter how much Lebanon tries to avoid the predicament of heading the Security Council next month, and the proposal for sanctions on Iran, Western states will still be able to pass [the resolution for] sanctions in June, even if they are postponed. The worst is yet to come for Iran; postponing the Security Council resolution will not deflect the West, Israel in particular, from dealing with the Iranian nuclear file issue. We all remember how French opposition to the resolution for the Iraq war did not dissuade America from taking the decision to overthrow the Saddam regime. In fact at the time France fooled the Iraqi regime into continuing to believe that the war was far away, yet what happened was the opposite.

Today, Iran is facing the same fate. The predicament [is that] delaying the sanctions, or trying to bypass them, will not serve as a victory inasmuch as it will be a dilemma because it is a matter that will speed up war. If America doesn’t do it, Israel will, as most of the statements coming out of America do not state that Israel will not strike Iran but are mostly to the effect that Tel Aviv will not use force “now”.

Therefore, the Lebanese must not waver too much; if they vote for the resolution, then [they should remember that] Syria did so before them with regards to Iraq, and if they abstain from voting then that will cause less damage.

The conclusion therefore is that no one can protect Iran except the Iranians themselves by being rational. All the signs show that the Tehran regime is as far away as it can be from rational behavior. Asharq Alwsat