by yalibnan
548
Obama’s insistence on a settlement freeze is in the interests of Israel as well as the Palestinians. Israelis may fear and even detest Mr Obama , but the American president is actually doing them a favour.
Share: 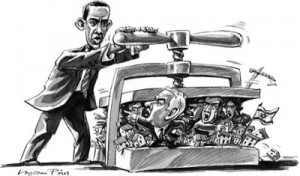 Israel’s alarm at the deterioration in its relations with the US is palpable. In Jerusalem recently, even a liberal commentator told me: “Barack Obama is a disaster for Israel. I don’t think the general public realise just how much of a disaster he is.” Government officials are more careful – but only a bit. Danny Ayalon, the deputy Israeli foreign minister, says that it would be a “grave mistake” for America to present its own Middle East peace plan, an idea that the US president’s people are known to be considering.

Listening to all this, I could not help thinking back to the early stages of the Northern Irish peace negotiations. In part, this is because some of the same cast of characters have moved from Belfast to Jerusalem. George Mitchell, Mr Obama’s envoy to the Middle East, played a crucial role as a go-between in Ulster. Tony Blair Is also on the scene, this time installed in the American Colony hotel rather than Stormont castle.

But there is more to the parallel than familiar faces. The Israelis’ furious reaction to the pressure they are under from the Obama administration is reminiscent of the British rage early in the Northern Irish peace process, when it became clear that our American allies were intent on “talking to the terrorists” of the Irish Republican Army. But, as it turned out, the Americans were right to insist that there was a peace deal to be made with the IRA. They are right again on the Middle East peace process. There is still a deal to be had – and if Israel does not take it soon, the long-term survival of the Jewish state will be imperiled .

.In their more reflective moments, some senior Israeli politicians will acknowledge that a two-state solution is as vital for Israel as it is for the Palestinians. Dividing the land is the only way of ensuring that Israel remains both Jewish and democratic. The continued occupation of the West Bank, by contrast, always carries with it the risk of another Palestinian intifada, and is the major cause of Israel’s dreadful global image. Israeli politicians worry that the “delegitimisation” of their state has spread from the Muslim world to Europe. Tzipi Livni, leader of the Israeli opposition, recently had to cancel a trip to Britain for fear that she would be arrested on war-crimes charges.

Yet for all their long-term concerns, the Israelis have failed to make vital concessions, because the status quo still feels more comfortable. Israel’s assaults on Lebanon and Gaza have, for the moment, largely stopped the threat of rocket fire into Israel. The wall the Israelis have built around the West Bank has helped to prevent suicide bombings. The economy has done well in recent years. Things look good – if you do not look too far into the future.

By contrast, calling a complete halt to illegal Israeli settlements on Palestinian land – as Mr Obama has demanded – entails risks and pain. There are members of the Israeli cabinet who still cling to the idea of a Greater Israel, incorporating all of the West Bank. If Benjamin Netanyahu, the Israeli prime minister, delivered the settlement freeze the Americans want, his rightwing coalition would probably collapse. Many Israelis also worry that an eventual move to uproot at least 80,000 settlers as part of a peace deal could lead to a revolt in the army – some 30 per cent of whose officers are religious conservatives, presumed to be sympathetic to the settlers. Any such military revolt, one respected commentator told me, “would be the end of the state of Israel”. Even if a Palestinian state were established on the West Bank, the Israelis worry that it might fall into the hands of Hamas, just as Gaza did; and then become the base for renewed rocket attacks on Israel that could hit Tel Aviv and Ben Gurion airport.

So rather than discuss settlements, the Israelis are desperately trying to change the subject. They point out that there are many obstacles to a peace deal other than the settlements: the bitter division on the Palestinian side between Hamas and the Palestinian Authority, and between Gaza and the West Bank; Palestinian insistence on the “right of return” of millions of refugees and their descendants; the technical and emotional difficulty of dividing Jerusalem.

The Israelis are certainly right to argue that there is no guarantee that a freeze on settlements will lead to a peace deal. On the other hand, there certainly is a guarantee that a continued expansion of settlements will ensure that no peace deal is ever possible. The West Bank is already a small and arid place – and bits of it keep being chipped away. As the bitter Palestinian joke has it: “We’re negotiating over how to divide a pizza and the Israelis keep eating bits of it.” For that reason, Mr Obama is right to identify a halt to “settlement activity” as crucial.

Israelis have many theories about why Mr Obama is being so beastly to them. The wilder fringes of the Israeli right insist that the US president is an anti-semite – despite the fact that both his chief-of-staff and his top political adviser are Jewish. Even leftwing commentators muse that Mr Obama may be more instinctively sympathetic to the developing world than to the Jewish state.

But no special explanation should be needed for Mr Obama’s insistence on a settlement freeze. Such a policy is in the interests of Israel as well as the Palestinians. Israelis may fear and even detest Mr Obama – but the American president is actually doing them a favour. FT