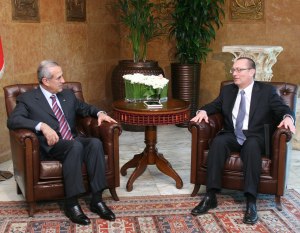 Jeffrey Feltman, U.S. Assistant Secretary of State for Near Eastern Affairs indirectly criticized during an interview with An Nahar newspaper the Free Patriotic Movement and said President Michel Suleiman was “ignored” during the tripartite meeting between the Syrian and Iranian presidents and the Hezbollah leader.

Feltman said it was painful to see that Hezbollah chief Sayyed Hassan Nasrallah was treated as a head of a state during his meeting with Presidents Bashar Assad and Mahmoud Ahmadinejad in Damascus last month.

The former U.S. ambassador to Lebanon wondered whether the Christians who signed an agreement with Hezbollah are realizing that President Suleiman was ignored during the Damascus talks at a time when “a militia leader was being treated as a head of state.”