by yalibnan
1608
"Convergence: New Art From Lebanon" is billed as the first large retrospective of contemporary Lebanese art outside Lebanon in decades.
Share: 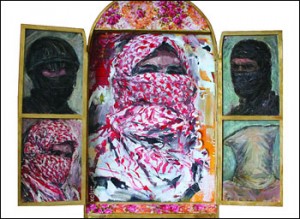 By: By Philip Kennicott

There is a rather silly belief that art somehow concentrates the essence of a people, that immersing oneself in the national museum of a strange country is a tantric fast track to real enlightenment. Rarely do we know enough of what really matters — the political and social history of a people, their insecurities, myths and illusions — to make any sense of the art on display, which is often borrowed, stolen or imitated, reflective of a tiny elite or cultural subgroup, and filled with everything but the truths that desperately need to be spoken.

“Convergence: New Art From Lebanon,” billed as the first major exhibition in decades of contemporary Lebanese art outside of Lebanon, is filled with art that makes urgent demands. These large-scale works, on display at American University’s Katzen Arts Center, represent a cross section of Lebanese artists, many of whom are grappling with the life-and-death issues of war, sectarian divide and national survival.

It’s tempting to want this show to sort out the mess that is Lebanon, to make sense of a country that, despite being a crossroads of civilization, lapses all too often into barbarity and self-destruction. One longs for something inherently and essentially Lebanese, something that transcends the religious and class divides that frequently tear apart this beautiful and luxuriously over-endowed country.

But art doesn’t make sense of war. It’s the other way around. War sorts this art into the most simplistic categories. You’re either making art about war, or you’re making irrelevant art.

It’s almost impossible to walk through this exhibition without consigning about half of it to the usual doghouses of triviality: the merely pretty, the escapist, the decorative. Several large canvases by Chaouki Chamoun fall into all three categories. Well crafted and colorful, you can see them on the wall of any arid, modernist, high-rise apartment from Dubai to Moscow to Houston, wherever new money congeals. “During the war, I stopped painting,” Chamoun says in the catalogue. “I never wanted anyone to live off my pain.”

That’s a noble sentiment, and no critic living in a largely peaceful and prosperous country should prescribe how artists half a world away should respond to war. History gives us oddly contradictory evidence about art and war. If you walked through the Corcoran’s recently closed “Turner to C?zanne” exhibition with the dates 1870-71 in your head — the catastrophic years of the Franco-Prussian War — you might conclude that nothing better could have happened to the artists of France. But listen to the art music written before and after World War II, and you hear the dissolution of a centuries-long tradition.

But Chamoun’s art seems pale in comparison with Nada Sehnaoui’s “Rubble,” from 2008. Sehnaoui says she created this large grid of photographs using images taken in the southern suburbs of Beirut, three days after the cease-fire that ended the devastating, month-long 2006 war with Israel. The snapshots turn the domestic world inside out. Furniture and clothing are jumbled together with broken concrete and rebar. A child’s doll, lying face down, would be a cheap and exploitative gesture were it not seen in the context of wider destruction.

The grid arrangement raises questions: Is this an effort to bring order to chaos? Or is the grid, a form so often imposed on cities, or even the hours of our over-scheduled lives, a kind of further violence?

Or is Sehnaoui simply falling back on a basic means of organizing material? The grid is mechanical, and the work, for all its horrifying imagery, feels mechanical, an almost unconscious effort to organize the unthinkable. The response is almost like an autoimmune reaction of the soul. Confronted with the toxicity of humanity, art forms scabs on the surface, and depth is elusive.

If the process is mechanical or unconscious — war hurts, must make art — then it’s little surprise that the most opaque and confusing works are the most evocative. Compared to Hannibal Srouji’s “Fire IV,” an abstract and elegant canvas pitted and charred by fire into appealing patterns, Mario Saba’s “The Temple” is a wild cacophony of dark thoughts about war and humanity. Wires, twisted metal and old electronic appliances form a “tree of knowledge” in which a video screen, placed like a vulture, shows images of atomic mushroom clouds devouring the world with a cormorant’s appetite. There are religious motifs as well, references to the chalice and the altar, and dark intimations that utopia is always descending into the Babel of war, chaos and destruction.

It is a vital work that struggles to mean something beyond the surface energy of its anger and angst. Its emotional landscape seems to be exactly the thing the stylized bird in Joumana Jamhouri’s “Sky is the limit” is escaping. Jamhouri’s large photographic fantasy, saturated with azure blues, shows a dove carrying the Lebanese flag aloft. It’s not clear if the bird is ascending in a gesture of hope, or simply fleeing the ugliness on the ground.

Work by work, the war is inescapable. The viewer begins to feel as constrained by war and violence, as an organizing motif, as war must constrain artists facing the blank canvas in Lebanon (or New York or Paris, wherever they gather). It is the fact that won’t go away, and in the end, it seems that war has more power over the art than art has over war. You come to this realization reluctantly, and in the face of the manifest professionalism and polish of many of the works on display.

Jean-Pierre Watchi’s “Composition 54: ‘Summer of 2009,’ ” a looping digital animation filled with bright colors that suggest flowers or candy, mimics the viewer’s experience of the larger exhibition. If you watch it long enough, the music gives way to background noises that include what sound like gunshots or explosions. The longer you invest in the work, the more it comes back to the same place, the paralyzing place where violence interrupts and ruins everything.

War seems to have channeled Lebanese creativity into familiar patterns, bottling it up in traditional artistic forms. But perhaps that’s not fair. It’s presumptuous to expect artists to represent anything beyond art. Despite exhibitions such as “Convergence,” art is in fact a poor and often dangerous avenue to understanding a people. A painting from the exhibition can stand as a metaphor: In Oussama Baalbaki’s “Thunder in the Room,” a young man sits on a chair, with his nose stuffed so far inside a book that not only does it obscure the world around him, it would be impossible for him to read the words on the page. The book is art, the young man is the viewer, and the words on the page are the meaning or essence of Lebanon.