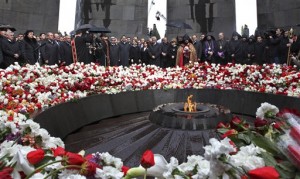 Hundreds of thousands of Armenians laid flowers Saturday at a monument in Armenia’s capital Yerevan to the victims of mass killings by Ottoman Turks, marking the 95th anniversary of the start of the slaughter.

Historians estimate that up to 1.5 million Armenians were killed by Ottoman Turks around the time of World War I. Turkey denies that the deaths constituted genocide, saying the toll has been inflated and those killed were victims of civil war and unrest.

Residents of Yerevan and other regions and representatives of the Armenian diaspora marched to a monument on a hill overlooking the capital. Some carried placards such as “Nobody and nothing will be forgotten!” and “Genocide never gets old!”

Armenian President Serge Sarkisian described the slaughter as “unprecedented in its scope, monstrosity and graveness of its consequences” in an address to the nation.

The slaying began on April 24, 1915 with the rounding up of about 800 Armenian intellectuals, who were murdered. The Ottoman authorities then evicted Armenians from their homes in actions that spiraled into the mass slaughter of the Armenian population. Scholars widely view the event as the first genocide of the 20th century.

“We are grateful to all those in many countries, including Turkey, who understand the importance of averting crimes against humanity,” Sarkisian said.

Turkey has warned the U.S. administration of diplomatic consequences if it fails to prevent the passage of a congressional resolution that would brand the killings of Armenians genocide. The Foreign Affairs Committee of the House of Representative’s last month passed a resolution declaring the killings genocide, but it is unclear whether the full House will vote on it.

In addition to tensions over the mass killings, efforts to normalize ties between Armenia and Turkey also have been thrown back by the conflict in Nagorno-Karabakh.

The two countries signed agreements for reconciliation in October that would reopen their border, but neither country has ratified it. Armenia said this week it was freezing its ratification of the deal, accusing Turkey of dragging its feet by demanding the Nagorno-Karabakh dispute be settled first.

Turkey closed its border with Armenia in 1993 to protest the Armenia-backed war by separatists in the Nagorno-Karabakh region; the region is an enclave within Azerbaijan but under the control of Armenian and ethnic Armenian forces.

The Armenian community in Lebanon also held a rally today to mark the 95th anniversary of the Armenian genocide. The rally was held on the coastal road north of the capital, Beirut

Thousands across California are expected to gather at the Turkish Consulate in Los Angeles on Saturday, to demonstrate for an end to Turkey’s 95 year campaign of genocide denial and the recognition of the Armenian Genocide by the United States.

In Moscow the Russian-Armenian Commonwealth and the Union of Armenians of Russia also held a rally . AP, Ya Libnan