Kahwaji: No Scud missiles in Lebanon 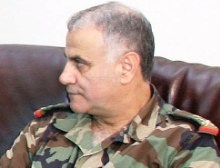 In comments published by Al-Nahar and communicated by Reuters, Kahwaji, who met earlier in the day with Egyptian Foreign Minister Ahmed Aboul Gheit, said Scuds were far less mobile than Katyusha rockets and much less likely to be passed across the border undetected.

Earlier today, the Egyptian Foreign Minister who is currently visiting Lebanon labeled the reports that Syria supplied Hezbollah with Scud missiles a “big lie” and described the charge as “sheer provocation”