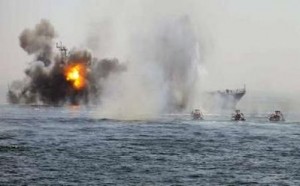 Iran has been holding military maneuvers in the gulf and the Strait of Hormuz annually since 2006 to show off its military capabilities. The last four editions of the games were held in the summer, but there has been no official explanation why they were brought forward this year.

The war games have routinely heightened tension in the region, but they have more recently taken added significance as the standoff between the West and Tehran over Iran’s nuclear program grows deeper.

The West suspects the program conceals a nuclear arm production drive, a charge that Iran denies.

Iran has in the past signaled that it would close the Strait of Hormuz if attacked by the West, something that makes holding war games there a particularly sensitive move. Some 40 percent of the world’s oil and energy supplies pass through the narrow waterway at the mouth of the Persian Gulf.

In Washington, Pentagon press secretary Geoff Morrell played down the significance of the maneuvers, saying “they don’t seem out of the ordinary” from what Iran’s military has done in the past.

Asked Wednesday — the day the maneuvers were announced in Tehran — what concerns he had about the Iranian war games, Morrell said: “I haven’t heard any particular concerns.”

“They conduct exercises and tests and war games with some frequency,” he told a Defense Department news conference. “I think any sovereign state is obviously within its rights to drill and prepare and make such preparations for their own defenses.”

The Iranian television report said naval, air and ground units from the Guard were participating in the three-day games codenamed “The Great Prophet.” It said the war games will witness the commissioning of what it described as an “ultra-speed” vessel called “Ya Mahdi” and a total of 313 speedboats with the capability of firing rockets and missiles also would participate.

On Wednesday, Defense Minister Gen. Ahmad Vahidi said “new weapons” would be test-fired in the war games, but did not give any details.

“What’s always been interesting is how much what they do comports with what they say,” he said. “It’s more often the case with testing of weaponry than it is with exercises and drills, but often they profess and claim to have capabilities which are not demonstrated in reality based upon our review of intelligence after the fact.”

Tehran was angered by President Barack Obama’s announcement this month of a new U.S. nuclear policy in which he pledged America would not use atomic weapons against nations that do not have them. Iran and North Korea were pointedly excluded from the non-use pledge, and Iranian leaders took that as an implicit threat.

Iran’s supreme leader, Ayatollah Ali Khamenei, said Wednesday that the U.S. “nuclear threat” is a “Stigma in the U.S. political history,” saying Iranians will not allow the U.S to dominate the country.