Baroud: We are determined to hold the elections on time 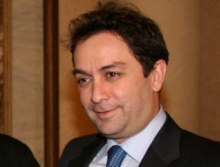 Interior Minister Ziad Baroud held a press conference to brief the media on the upcoming municipal elections. He said:

-Holding the municipal elections on time provides stability to Lebanon, despite all the Lebanese and regional developments.

– The final touches have been put on the security plan; the electoral process requires a large number of security forces members.

– 14,000 employees will participate in organizing the electoral process and they will undergo short-term training courses.

– 7,507 candidates are running for seats in 313 municipalities in Mount

– 6.6% is the percentage of women candidates running for municipal councils

He concluded his briefing by saying: We hope to receive complaints upon the occurrence of any violations during the electoral process and 1790 is a toll-free hotline number for receiving all complaints