Can conservationists save Oscar Niemeyer’s fairground in Lebanon?

by yalibnan
1414
Once the pride of Tripoli, Lebanon – designed by Brazilian architect Oscar Niemeyer – the international fairground became another casualty of the 1975 civil war. It hasn't recovered yet.
Share: 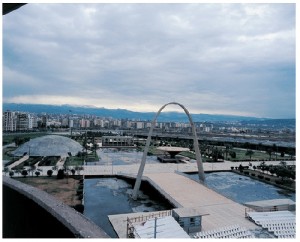 An abandoned international fairground in Tripoli, Lebanon, designed by famed Brazilian architect Oscar Niemeyer – the architect behind Brasília and the United Nations Secretariat in New York, among other buildings – faces an uncertain future.

Nearly complete when Lebanon’s civil war began in 1975, the modernist international fairground was mostly abandoned throughout the fighting and the following two decades of reconciliation and reconstruction. A theater housed in an oversized concrete dome was reportedly used as a weapons dump by Syrian soldiers, who reinforced it with unsightly steel rods, still visible.

Named after Rashid Karami, the city’s 10-time prime minister who was assassinated in the last years of the civil war, the site is a forgotten, sprawling artifact of architectural modernism.

It tells part of the development story of the 1950s and ’60s, an era of political disruption and ambitious building projects. 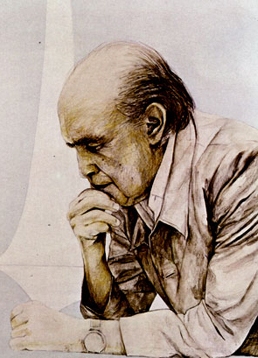 Mr. Niemeyer had just completed his signature government buildings for Brasília, Brazil’s capital built on a savanna, when he accepted the commission from Lebanon’s government in the early 1960s. His 15 pavilions set amid an oval park expressed his commitment to reinforced concrete, from the ceremonial arch to the pyramid to the amphitheater, helipad, and curving exhibition hall.

Today the cracked, empty buildings get less attention than the grounds; a conservation group has restored the park’s flora and is now fighting for its architecture.

In 2006, the World Monuments Fund listed it as one of its 100 most endangered sites, in response to a failed plan to replace it with a tourist village based on Disneyland. For now, the maarad, or exhibition, as Niemeyer’s park is known locally, sits near the sea on the edge of the city, its only occupants curious visitors and residents out for a walk.