Baroud updates the president on security in Lebanon 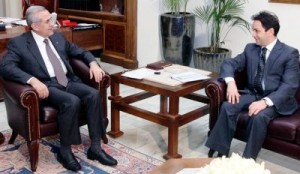 Interior Minister Baroud held a meeting attended by military and security officials, in addition to State Prosecutor Saeed Mirza, to follow up on their preparations ahead of the upcoming municipal elections.

Baroud later met with president Michel Suleiman at the Baabda palace to update him on the security situation in Lebanon as well as the ongoing preparations for the municipal elections according to a statement issued by the president’s office.