Lebanese President: Efforts towards a reconciliation between Egypt and Syria are underway 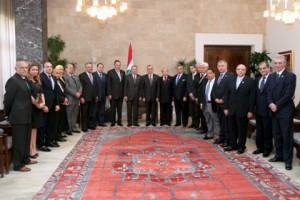 Lebanese President Michel Suleiman has said that efforts towards a reconciliation between Egypt and Syria are underway, adding that the interests of the Arab people are “safeguarded when their governments are united.” His comments were delivered on Tuesday at a meeting with the Egyptian-Lebanese Friendship Association.

Signs of reconciliation were evident at a reception held by the Syrian embassy in Cairo celebrating the Syrian National Day, where Egyptian and Syrian senior officials amicably exchanged compliments.

Meanwhile, sources have said that Syrian President Bashar al-Assad will visit Egypt in a few days, but that the exact date of the visit will be announced only 24 hours in advance for security reasons.

This would be al-Assad’s first visit to Egypt in four years of tension between the two countries.

The sources added that President Hosni Mubarak and President Bashar al-Assad will not discuss differences between the two countries since resolving them remains difficult at this stage.