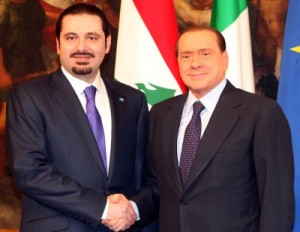 Lebanon’s prime minister compared accusations that Hezbollah has obtained Scud missiles to charges that Iraq had weapons of mass destruction ahead of the 2003 U.S.-led invasion.

Syria has denied the charges of providing Scuds, which can carry a warhead of up to 1 ton, making them far larger than the biggest rockets previously in Hezbollah’s arsenal. Hezbollah has neither confirmed nor denied the Israeli claims.

Allegations that Saddam Hussein was developing weapons of mass destruction were the main U.S. rationale behind the U.S.-led war in Iraq, but none were found after the 2003 invasion.

“The media suddenly started reporting that there are Scud missiles in Lebanon. Do you know what a Scud missile means? I believe it is as big as this room,” Hariri said.

“Threats that Lebanon now has huge missiles are similar to what they used to say about weapons of mass destruction in Iraq,” he added. “These are weapons that they did not find and they are still searching for.”

“They are trying to repeat the same scenario with Lebanon,” the prime minister said.

Hezbollah’s leader, Sheik Hassan Nasrallah, has said his militants have more than 30,000 rockets and are capable of hitting anywhere in Israel. Those claims match Israeli intelligence assessments.

Hezbollah and Israel fought a 34-day war in 2006 that left some 1,200 Lebanese and 160 Israelis dead. During the monthlong conflict, Hezbollah fired nearly 4,000 rockets at northern Israel, including several medium-range missiles that for the first time hit Israel’s third-largest city, Haifa.

On Monday, the U.S. State Department summoned Syria’s deputy chief of mission in Washington, Zouheir Jabbour, and accused Damascus of “provocative behavior” in supplying arms to the Iranian and Syrian-backed Hezbollah.

A statement from the State Department did not specifically mention the Syrian alleged arms deals. It did allude to the transfer to Hezbollah of Scud ballistic missiles, but did not explicitly state that Syria was behind such a deal.

Last week, White House press secretary Robert Gibbs told reporters that the U.S. had raised its concerns about reports of Syrian Scud missile transfers to Hezbollah with the highest levels of the Syrian government.

Hezbollah Minister Hussein Haj Hassan refused to confirm or deny Israeli allegations that the militant group has acquired Scud missiles. He said Friday the group was always arming itself but, “what we have is not their business.” AP