by yalibnan
845
U.S. Ambassador to Beirut has informed the Lebanese Speaker and Prime Minister about Israel's intention to bomb a truck allegedly transporting arms to Hezbollah
Share:

The United States does not believe Syria transferred long-range Scud missiles to Hezbollah, but has no doubt that Damascus had the intention to deliver missiles to the terror organization, US officials told the Reuters news agency on Saturday.

“We think the intent is there,” a senior US official said. But the official and two others briefed on the case said it was unclear whether the missiles, which could hit deep inside Israel, were actually handed over in full to the group. The officials spoke on condition of anonymity because of the sensitivity of the matter

“We believe a transfer of some kind occurred but it is unclear if the rockets themselves have changed hands,” the senior official said.

A partial transfer could involve weapons parts, documents or funding, other officials said.

Another official said doubts were growing that Syria had delivered the Scuds in full and allowed them to transit to Lebanese territory: “We don’t believe it happened.”

“It’s unclear at this point that a transfer has occurred … and the United States has no indications that the rockets have moved across the border,” a third US official said.

Such comments contradict the remarks made by White House Spokesman Robert Gibbs last Wednesday, who said the US administration was “deeply concerned” with the alleged weapons transfer, which he said could undermine stability in the Middle East. the remarks also contradict with the the statement of State Department Spokesman P.J. Crowley, who said such a move could put Lebanon at risk.

Syria also warned that Israel was paving the way for new military action through its allegations.

The allegation comes at a sensitive time in U.S.-Syrian relations. Washington has reached out to Syria in recent months by nominating the first U.S. ambassador to Damascus since 2005 and sending top diplomats to meet with President Bashar Assad. 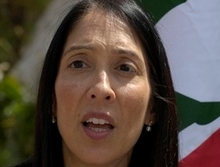 Washington, however, asked Israel to stop the operation at the last minute to avoid the eruption of war.

The sources said Sison showed aerial photos and documents of the truck, which do not confirm that it was transferring Scud missiles to Hezbollah as Israeli media previously reported.

The ambassador reportedly asked Berri and Hariri to work on putting an end to the danger that is emanating from the alleged transfer of weapons to the Lebanese Shiite group.