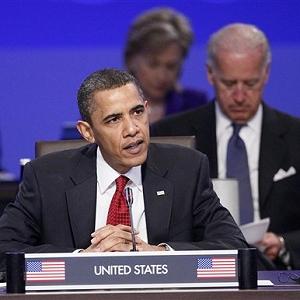 U.S. President Barack Obama has opened the 47-nation Nuclear Security Summit in Washington with a warning about the potential of nuclear terrorism. The president says al-Qaida and other terrorist groups are trying to acquire nuclear material, and must be stopped.

“Two decades after the end of the Cold War, we face a cruel irony of history: The risk of a nuclear confrontation between nations has gone down, but the risk of nuclear attack has gone up,” Mr. Obama said.

In his address to the first full day of the summit, Mr. Obama said terror networks such as al-Qaida are actively seeking material for nuclear weapons. He said if they get it, they will use it.

“Were they to do so, it would be a catastrophe for the world, causing extraordinary loss of life and striking a major blow to global peace and stability,” Mr. Obama said.

The conference follows two days of meetings between Mr. Obama and other heads of state on efforts to keep nuclear materials out of terrorists’ hands.

Mr. Obama met Monday with Chinese President Hu Jintao, who agreed to work with the United States on sanctions against Iran for its nuclear activities. China has been reluctant to place more U.N. sanctions on Tehran.

Also Monday, a spokesman for Ukrainian President Viktor Yanukovich announced Ukraine will get rid of its highly enriched uranium by 2012.

“Last night, in closed session, I believe we made further progress pursuing a shared understanding of the grave threat to our people,” Mr. Obama said. “And today, we have the opportunity to take the next steps.”

“I will do [my] best to make this summit a success. So I hope to see all of you in Korea,” Mr. Lee said.

This year’s meeting is expected to end with a joint declaration to guide work in preventing terror groups and criminal gangs from getting access to nuclear material. Mr. Obama says that is a first step toward his long-term goal of ridding the world of nuclear weapons.