Gemayel : We disagree with Jumblatt on Hezbollah arms 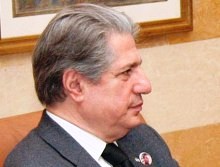 Gemayel was responding to As Safir report in which Jumblatt was quoted as saying he wants to eliminate discussions over the issue of Hezbollah’s arms.

Gemayel said: if Jumblatt does support the suggestion , then the Kataeb would oppose the move.

Analysts are speculating that ” elimination of the discussions over the issue of Hezbollah’s arms”, may be is the price that Jumblatt had to pay for his trip to Syria.