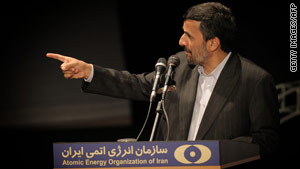 In a speech celebrating National Nuclear Day, President Mahmoud Ahmadinejad slammed “selfish behavior” by “arrogant” countries that have tried to negotiate a halt to Iran’s nuclear activity. As he spoke, a crowd chanted “God is great” and “Death to America.”

“Today, Iranian scientists and experts have fully mastered the nuclear and have been taking giant steps and moving at full pace towards meeting all domestic needs and making proper use of home-grown potential in the field of nuclear energy,” Ahmadinejad said.

Officials unveiled what they called a “third generation” of centrifuges six times faster than the ones currently being used.

Insisting Tehran’s nuclear efforts are purely for energy purposes — despite claims by many Western nations that Iran is pursuing nuclear weapons — Ahmadinejad said he had been open to a deal, and blamed other countries for it falling apart.

Ahmadinejad also accused the United States of encouraging nuclear proliferation through its policies.

Referring to the signing of an arms deal between the United States and Russia this week — including remarks by U.S. President Obama that the U.S. goal is a world without nuclear weapons — Ahmadinejad called it “a show performed by the United States” and “a great lie.” CNN