King Abdullah: Jordan was better off before peace treaty with Israel

by yalibnan
327
In an April 5 interview with the wall Street Journal Jordan’s King Abdullah said “economically we were better off in trade and in movement before my father signed the peace treaty with Israel” adding : “The political trust is gone, there is no real economic relationship between Jordan and Israel”
Share: 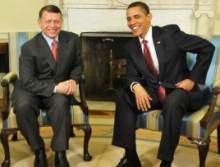 In an April 5 interview with the Wall Street Journal King Abdullah said “economically we were better off in trade and in movement before my father signed the peace treaty with Israel” adding : “The political trust is gone, there is no real economic relationship between Jordan and Israel”

Here are excerpts from the interview of King Abdullah :

WSJ: What is your message when you meet with the Israelis?

HM: I think the long-term future of Israel is in jeopardy unless we solve our problems. Fifty-seven countries in the world, a third of the United Nations, do not recognize Israel. In a way, I think North Korea has better international relations than Israel.

So when you look at the Arab-Islamic peace proposal what you are talking about is 57 nations reaching out to Israel for a long-term future. In America specifically, you hear, well, why doesn’t Jordan take the Palestinians into our country? … That would create tremendous instability. So if the Israelis want to push the Palestinians into Jordan, I don’t see how that makes sense and how the international community will accept that because that would be an exodus of 1.8 million Palestinians from their homes into Jordan, Lebanon and Syria. And that would bring even more instability on their borders. But it still does not solve their long-term problem … because the Arab-Israeli population in Israel proper, in eight to ten years, will be 50% of Israel. The Israelis have a major challenge on the future of their existence.

Wouldn’t it be better today when you’re in a stronger position to make peace not only with your neighbors but with the whole Arab-Islamic world than kicking this problem down the road two or three years where your options become reduced? And there are Israelis out there that understand this and are reaching out. They are very concerned. And friends of Israel around the world, of whatever religious background, that also see this calamity being created and are very concerned. America has a saying it’s been using; it’s time for a bit of tough love for all of us to get this problem solved.

WSJ: What do you think when you look at Iran and international policy. There’s a lot of talk now about how active Iran is in Iraq as far as trying to push their political clients. Do you see it active in Hezbollah/Lebanon? In the Palestinian territories? Is the engagement track working?

HM: Again, I look at it from a different angle. If there are those that are saying that Iran is playing mischief, then I say it is being allowed to play mischief. The platform they use is the injustice of the Palestinians and Jerusalem. So if you start taking those cards off the table, then Iranian influence on the Mediterranean through Hezbollah and Hamas in Gaza diminishes or becomes non existent. My view is that I am really against any military action in Iran, that is Pandora’s box. But by dealing with the core issue, that’s when you start taking cards away from the Iranian regime.

WSJ: When you talk about Jordanian-Israeli relations at a low, it’s just because there has not been that trust on this issue?

HM: The political trust is gone, there is no real economic relationship between Jordan and Israel, for Israeli businessmen to get into Jordan he takes a visa that day; it is almost impossible for a Jordanian businessmen to enter Israel. So economically we were better off in trade and in movement before my father signed the peace treaty. I mean, obviously there was the golden period of the wonderful relationship between my father and Prime Minister Rabin, and after the death of PM Rabin, again there was a resurgence with PM Barak, but it’s just been a decline since then.