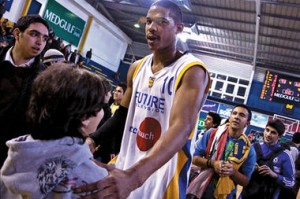 Madison Square Garden it is not. But, like the landmark New York arena, Al-Riyadi club’s modest, dilapidated, West Beirut gymnasium serves as a final destination for American hoop dreams.

American basketball players have long been exports to Europe and the Far East, seeking fame and fortune in lieu of obscurity and insubstantial paychecks in the NBA’s development league. But recently, the Middle East has turned out to be a surprisingly successful market.

“The Americans have a big impact,” says Kervork (who declined to give his last name), a fan of Antranik, a team associated with Lebanon’s large Armenian community. “Without them, it wouldn’t be fun to watch basketball in Lebanon,” he says.

The US players quickly notice the cultural differences. Fans chain-smoke when their team is down, posters of political figures replace retired numbers hanging from the banisters, and riot-gear-clad members of Lebanon’s armed forces patrol the stands with stockless AK-47 assault rifles. In a league where most teams are aligned with sectarian or political groups, the soldiers are necessary to keep the tensions of rival fans at bay.

Joe Vogel, the center for Beirut’s Al-Riyadi team, made a career out of playing abroad after an injury dashed his hopes of playing in the NBA. In Lebanon, Mr. Vogel is content – he even acquired Lebanese citizenship. “We get treated like kings over here – everybody knows us because we’re on TV,” Vogel says.

While soccer may be the Middle East’s most-loved sport, fans in Lebanon are generally barred from attending matches, with authorities fearing clashes. This ban – along with a presence of basketball in the country since 1890 – has helped boost basketball’s popularity here.

Photo: Former Los Angeles Laker C.J. Giles was surrounded by fans of Beirut’s Al-Riyadi team after a victory in February. A number of former NBA basketball players are finding new fame in Beirut, Lebanon, as the sport grows in popularity.