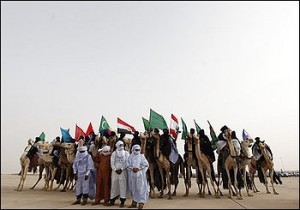 The chief of the Arab League is warning that Israel’s actions could bring about a final end to the Middle East peace process.

Amr Moussa urged an Arab leadership summit in Libya on Saturday to forge a new strategy to pressure Israel.

He said the peace process cannot be “an open ended process.”

Earlier this month, Arab nations opened the door for Palestinian President Mahmoud Abbas to enter four months of indirect, American-brokered peace talks with Israel. But they later threatened to withdraw support for the talks because of Israeli announcements on new plans for construction in areas Palestinians want for a future state.

The summit will also address the West’s standoff with Iran over its nuclear program, and Iraq and Sudan.

Photo: Libyan camel riders holding flags of Arab countries gather to perform at Sirte airport as part of a welcome ceremony during the arrival of Arab leaders to attend the upcoming Arab League summit in Sirte, Libya, Friday, March 26, 2010