Sfeir defends the president and presidency 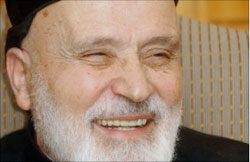 Maronite Patriarch Nasrallah Boutros Sfeir issued a statement on Sunday which stated that “maintaining the presidency and President Michel Suleiman is essential to preserving Lebanon’s independence and strengthening the state.”

Former minister Wahab a staunch ally of Syria attacked last Wednesday President Michel Suleiman and called on him to resign for allegedly failing to govern the country.

Lebanese Forces bloc MP George Adwan met with Sfeir earlier in the day, following which the MP said attacks against Suleiman target stability in Lebanon and aim to obstruct the country from having a strong president that expresses the will of the people.