by yalibnan
591
Finally Syria said yes to Jumblatt's visit according to a statement issued by Hezbollah on Monday. Jumblatt will reportedly head to Damascus on March18
Share: 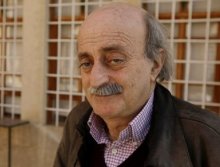 However, Hezbollah did not specify the date of Jumblatt’s , but OTV reported that the PSP leader will visit Damascus on March 18

According to the statement, Nasrallah has been playing a mediating role between Jumblatt and Assad at the former’s request.

Damascus decided to accept Jumblatt’s visits following his latest statements on Syria, the Resistance and Palestine, the statement said, referring to Jumblatt’s interview on Al-Jazeera television.

The PSP leader told Al-Jazeera on Saturday that he had previously made some inappropriate comments about Assad “in a moment of anger and loss.” In 2007, Jumblatt branded Assad “the dictator of Damascus… a monkey, snake and a butcher, a liar… and a criminal.”

Following the announcement by Hezbollah on Monday , Jumblatt told Al-Manar television that “the page is turned with Syria,” adding that he has a lot to tell Syrian President Bashar al-Assad when the two meet.

Folowing his interview with al Manar , Jumblatt discussed with Speaker Nabih Berri over the phone his upcoming trip to Damascus .

Jumblatt whose father , Kamal Jumblatt was assassinated by the Syrian regime is under heavy criticism from within the Druze community and the PSP for being so anxious to visit Syria.

The al Akhbar newspaper reported on Monday that a new group calling itself the “Free Druze” has distributed a statement in the Shouf region of MT Lebanon criticizing Druze leader for “underestimating the minds of fellow Druze citizens.”

“Your twisted policy is no longer a source of confidence,” the statement said

“The mask fell and Socialism is buried. Enough underestimating the minds of the Druze.” The statement added.

“We will not allow you, or your lawmakers or your men to use us to make a fortune in the name of the Druze,” the statement threatened.