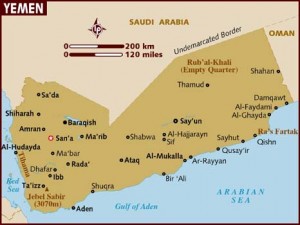 The government of Yemen and the Arab world’s two top news channels are embroiled in a fight over broadcast equipment, underscoring concerns about censorship in the troubled Arabian Peninsula nation.

Al Jazeera and Al Arabiya said Friday that security officials stormed their offices in the capital, Sana, on Thursday and seized expensive equipment because of their stations’ coverage of growing unrest in Yemen’s south, according to reports on their websites. Al Arabiya also said its bureau chief was briefly detained.

Speaking to the official Saba news agency, the unidentified Yemeni official said authorities cracked down on the stations only because they were “not authorized by any ministry.”

But the official also confirmed government anger at news coverage of south Yemen, a once independent section now seething again with separatist sentiment.

The official accused Al Jazeera of broadcasting archival images of events in the south as news footage, “a matter that reflects a travesty of reality and encourages the subversive and separatist elements targeting Yemen’s security, unity and social fabric.”

Yemeni officials had welcomed a flood of foreign reporters after the arrest in Detroit last Christmas of an alleged Yemeni-trained Islamic militant suspected of trying to blow up a Northwest Airlines flight.

President Ali Abdullah Saleh’s government basked in the glow of the international coverage about its efforts to fight Al Qaeda.

But the welcome soured and visa restrictions tightened as reporters shone an unflattering light on the government’s rampant corruption and conduct as it tries to suppress insurgencies in the north and south, where thousands have taken part in violent protests.

A parched, impoverished and overcrowded land of 23 million, Yemen is afflicted with multiple security woes.

On Friday, the Reuters news agency quoted an unidentified Yemeni official as saying a suspected Al Qaeda militant who once worked at a nuclear plant in New Jersey had been captured. According to Reuters, U.S. citizen Sharif Mobley was arrested this month in Sana.

Public Service Enterprise Group, which owns the plants, said in a regulatory filing that Mobley worked at the plant from 2002 to 2008.

According to the official cited by Reuters, Mobley, who was injured during his capture, killed a person in a Sana hospital in an attempt to escape last week.