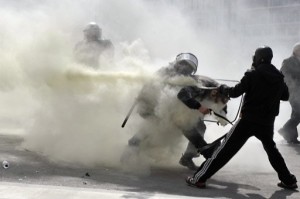 Greek police clashed in front of parliament with stone-throwing youths protesting against austerity measures on Friday but lawmakers still passed the bill in an emergency vote.

Police fired teargas to disperse dozens of demonstrators who hurled stones, burnt garbage containers and scuffled with other protestors. Strikes also shut schools and brought public transport in Athens to a halt.

Police pushed back protesters from the parliament’s steps, just before lawmakers passed much of a 4.8 billion euro ($6.5 billion) package including cuts on public servants’ bonuses and a 2 percentage hike of VAT.

About 12,000 demonstrators took to the streets according to police estimates, most of them peacefully. Shouting “never, never, never,” they protested the austerity measures meant to tackle Greece’s huge fiscal deficit and 300 billion euro ($408 billion) debt pile.

“We are fighting the austerity measures, the cuts in salaries and the new taxes,” said 21-year old student Christina Vasilopoulou, marching to parliament. “With these measures only a small percentage of the debt will be cut and the poor will suffer more.”

The only buses on the streets of Athens on Friday belonged to the riot police. At the airport more than 60 flights were cancelled as unions called impromptu work stoppages.

An opinion poll showed strong opposition to some measures such as higher VAT and a freeze on public pensions but support for moves to raise tax on alcohol, cigarettes and luxury goods.

Pagiaslis Giannis, 57, a private sector employee taking part in the march, said that while people wanted to express their anger they also understood that belt-tightening was necessary. “It’s like the slap that a father gives to his child and the child reacts even though he knows he was in the wrong,” he said.

Others disagreed with the protests, saying cutbacks were necessary to wrench Greece out of its debt crisis.

“We had anarchists (in December 2008) destroying our shops and now we have the strikes against the measures, our activity is shrinking with all this,” said Perickles Mitropoulos, a jewellery shop owner. “The Greek economy is in a critical situation and measures are necessary.”

Ratings agencies and EU policymakers have said delivery will be key in determining whether Greece can re-establish its credibility on the world stage and as a borrower.

The latest protests took place as Greek Prime Minister George Papandreou travelled to Germany for a meeting with Chancellor Angela Merkel in the hope of persuading her to back more concrete EU support measures for Greece.

Greek customers at a German restaurant in Athens said Berlin had a moral obligation to help.

“We helped rebuild Germany after the war by sending men to work there,” said 35-year old dentist Georgios Giakmis. “We buy their guns and cars, that’s why Germans are rich.”

The owner of the Beer Garden Ritterburg, Argirios Chachlas who had lived in Germany for 25 years, said being part of the EU obliged countries like Germany to give Greece support, even if only political.

“We work more than 14 hours a day and make less than they do in Germany, we are working, we don’t spend our time sitting in cafes drinking ouzo,” said Chachlas, 50.

The cutbacks and tax hikes were passed easily in parliament where the government holds a comfortable majority, but some expressed discontent even among the ruling PASOK party, feeling uncomfortable after the socialist government was elected in October on a tax-and-spend program.