Analysis: Advice From Brzezinski on How to Curb Iran

by yalibnan
626
Few have thought longer or harder over the Iranian challenges than Zbigniew Brzezinski , who was the White House national security adviser when the Iranian revolution erupted.
Share: 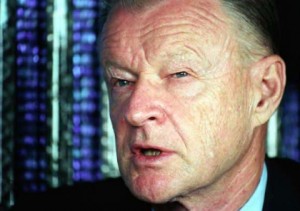 Iran is both today’s paramount foreign-policy challenge, and a quandary of the first order. Its nuclear program keeps expanding, its concern about international opprobrium seems limited, and nobody can be sure the United Nations Security Council will screw up the courage to impose more economic sanctions.

So where do we go from here? Few have thought about that challenge longer or harder than Zbigniew Brzezinski, the provocative foreign-policy icon who was White House national security adviser when the Iranian revolution erupted three decades ago and has followed the case ever since.

In an interview, Mr. Brzezinski lays out his formula. Try to stop Iran’s nuclear program, and make Tehran pay a price if it keeps pursuing it, but don’t count too much on sanctions; offer a robust American defense umbrella to protect friends in the region if Iran crosses the nuclear threshold; give rhetorical support to Iran’s opposition while accepting America’s limited ability to help it; eschew thought of a pre-emptive attack on Iran’s nuclear facilities; and keep talking to Tehran.

Above all: Play the long game, because time, demographics and generational change aren’t on the side of the current regime.

Mr. Brzezinski’s views are noteworthy because he touches so many bases in the Iran debate. He hails from the hawkish wing of the Democratic party, yet has a record of working comfortably with Republican administrations.

He was President Jimmy Carter’s national security adviser when the Iranian Islamic revolution exploded in 1979. More recently, he teamed up with current Defense Secretary Robert Gates on a milestone 2004 Council on Foreign Relations report that advocated that the U.S. begin to “engage selectively with Iran.” Shortly thereafter, former President George W. Bush summoned Mr. Gates to be defense secretary, a job he retains under President Barack Obama.

Today, Mr. Brzezinski sees two American goals in Iran: “One is to prevent Iran from acquiring a nuclear weapon, assuming that is its objective, and to neutralize its strategic political significance if it does. The second goal is to facilitate, carefully and cautiously, the political evolution in Iran toward a more acceptable regional role.” As he notes, those two goals—stopping Iran’s nuclear program while coaxing it into more responsible behavior—can conflict.

On the nuclear-weapons front: There’s a chance, he thinks, that Iran isn’t seeking to possess actual nuclear weapons, but trying to become “more like Japan, a proto-nuclear power” with a demonstrated ability to make nuclear arms without actually crossing that line.

But it’s impossible to know. And if a halt to Iran’s nuclear program can’t be negotiated, “then I think we have no choice but to impose sanctions on Iran, isolate it.” But sanctions alone, he says, won’t “determine the outcome.”

So if Iran crosses the line, the U.S. should “make commitments to any country nearby that America would see itself engaged if Iran threatened to use nuclear weapons against that country, or worse, if it used them.”

What does being “engaged” mean, exactly? “That means if [the Iranians] attack somebody, we have to strike at them,” Mr. Brzezinski says bluntly. “I don’t think every country in the region would want to have a formal agreement with the U.S. Some would want an understanding.”

This American defense umbrella “should be sufficient to deter Iran,” Mr. Brzezinski says. He thinks it significant that Ehud Barak, the defense minister of Israel, the nation most threatened by Iran’s nuclear program, said in a Washington speech last week that Iranian leaders were “sophisticated” enough to “fully understand what might follow” actual use of nuclear arms, and likely would use them for intimidation.

Meantime, on changing Iran’s character: The U.S. should adopt “a kind of posture of support and endorsement” of the forces inside Iran now openly opposing Iranian President Mahmoud Ahmadinejad, Mr. Brzezinski says, without deluding itself into it has the ability to propel a regime change.

Crucially, Mr. Brzezinski instead thinks forces at work within Iran will undermine the regime over time, so long as the U.S. and the West don’t take actions that actually interfere with that process.

Thus, it’s important to craft sanctions in a way that “doesn’t stimulate more anti-Westernism, or a fusion of Islamic extremism and nationalism.” He’d keep talking to Iran too: “Most major issues internationally that have been resolved by negotiation have involved negotiations over a long period of time.”

And he would avoid at all costs a military strike at Iran’s nuclear facilities. Iran, he said, would make no distinction between an Israeli or an American strike. “The Iranians would strike out at us, in Afghanistan, in Iraq, in the Strait of Hormuz.” If energy prices then soar, “we will suffer, the Chinese will suffer, the Russians will be the beneficiaries. The Europeans will have to go to the Russians for energy.” In effect, he argues, America, more than Iran, would be isolated.WSJ