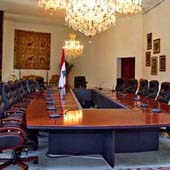 Lebanese president Michel Suleiman announced the list of participants in the new national dialogue talks yesterday , but immediately the list was challenged by both rival camps , March 14 and March 8.

Here are the key concerns:

Zahle representative: Suleiman picked Professor Fayez al-Hajj Chahine as Zahle’s representative , but “Zahle in the Heart” , the parliamentary bloc that won the elections last June issued a statement in which it condemned Suleiman’s decision. It urged the President to reconsider his decision by appointing someone from Zahle in the Heart.

Arab League: March 14 wants the League represented at the talks.

“March 14 will demand Arab League participation in dialogue sessions to ensure the interest of the Arab system in protecting Lebanon.”

But, March 8 which is backed by Iran and Syria is opposed to the presence of the league at the talks

Baath and Alawites: Baath Party leader MP Assem Qanso and Arab Democratic Party leader Rifaat Ali Eid protested against the list because they they were not represented .

Structure: The committee was expanded from 14 to 19 members

According to An-Nahar, 7 are from March 14 majority alliance , 7 from March 8 opposition alliance and 5 are centrists.

Date of talks: The president failed to set a date for the resumption of talks when he announced the list of participants