US Under Secretary for Political Affairs Bill Burns met with Lebanon’s President Michel Suleiman  at  the  Baabda  presidential on Tuesday.

According to  the The National News Agency (NNA)  the president talked with the US official about recent measures adopted for US-bound passengers travelling through countries described as “sponsors of terrorism,”…. Lebanon is on that list. He also talked about the US congressional bill aimed at banning “ satellite channels accused of supporting terrorism,” which  includes Hezbollah’s  Al-Manar television.

Suleiman criticized   these measures and told Burns “they  deny general, as well as media freedoms.”

According to the NNA, Suleiman thanked Burns for his country’s objection  to the  naturalization of  Palestinians living  in Lebanon.

Burns reiterated US support for Lebanon on several levels, especially on the level of military assistance to the Lebanese army, the NNA reported.

The US official  assured Suleiman that   Washington will not support any developments in the Middle East peace process at the expense of Lebanon, NNA reported .

Burns will head to Syria tomorrow . During this trip to the region Burns will   also be visiting Turkey, and Azerbaijan according to the US state department 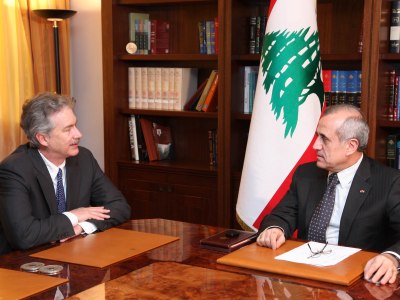