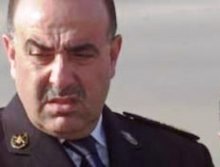 The Lebanese Forces on Saturday filed a lawsuit with Lebanon’s general prosecutor against Brigade General Mustafa Hamdan , the former commander of the Presidential Guard during ex -president Emile Lahoud’s term, for accusing LF leader Samir Geagea of being “a killing machine ” and for dividing the Lebanese and creating divisions within the Christian community.

Hamdan reportedly made the comment about Geagea during a recent meeting with former minister Wiam Wahhab.

Hamdan , along with 3 other officers were arrested in 2005 in connection with the assassination of Lebanon’s former Prime Minister Rafik Hariri. The four were released in 2009 for lack of sufficient evidence.

In its statement the LF also said Hamdan should have thought of Lebanon and the Christians when the country was under what it called the “indirect rule of Syria” prior to the withdrawal of Syrian troops in 2005.