On the eve of a mass rally that marks the 5th anniversary of the assassination of Lebanon’s former PM Rafik Hariri , the March 14 general-secretariat said in a statement that the Cedar Revolution will continue until all its objectives are achieved.

“The Independence Uprising will continue until it reaches its objectives,” said a statement read by former MP Samir Franjieh after a special meeting at the general-secretariat’s headquarters in Ashrafiyeh.

Franjieh said the revolution will also continue despite the many disappointments and mistakes because “we want the country to be united and not seized.”

March 14 reiterated its support for a strong Lebanese state that is capable of defending its territories and its objection to ownership of arms by militia groups , in reference to Hezbollah and the Palestinian militant organizations operating outside the refugee camps.

The statement also called for a” true dialogue among all sides to set the framework of coexistence and turn the page of war.

The statement finally urged Lebanese from all sects and regions to head to Martyrs Square on Sunday to take part in the mass rally “to stress their commitment to the truth and peace.” 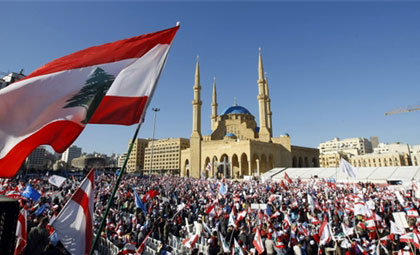 View of the 2009 rally in downtown Beirut that marked the 4th anniversary of Hariri’s assassination.