Analysis: Who Wants to Bomb Iran?

by yalibnan
1145
Meet the men calling on U.S. president Barack Obama to launch airstrikes against the Islamic Republic of Iran.
Share: 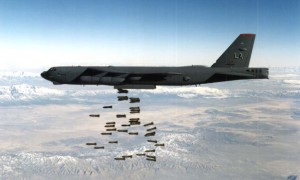 Meet the men calling on Barack Obama to launch airstrikes against the Islamic Republic.

They’re back! The “Bomb Iran” crowd is making a big return to the political center stage after months of puzzlement over what to do about developments in the Islamic Republic. Hawks such as Daniel Pipes and John Bolton are arguing that Iran is dead-set on its pursuit of a nuclear arsenal — and point to developments such as President Mahmoud Ahmadinejad’s announcement this weekend that Iran would enrich its uranium stocks to 20 percent to argue that diplomatic avenues have reached a dead end. The would-be bombers fear that the mullahs will leverage their nuclear capability to expand Persian influence through the Arab world and beyond — and argue that the United States must do anything in its power, including the use of force, to stop them.

This movement had its heyday in neoconservative circles in 2006 and 2007, following Iran’s official announcement that it had started to enrich uranium and the subsequent U.S.-led push in the U.N Security Council for additional sanctions. And who could forget 2008 presidential candidate John McCain’s memorable “Bomb, bomb, bomb Iran” gaffe, sung to the tune of the Beach Boys’ “Barbara Ann”? In the wake of Iran’s contested election last June, pro-bomb pundits have argued that the popular unrest — including the imminent anti-regime protests scheduled for Feb. 11, the anniversary of the Islamic Republic — far from meaning the United States should hold back, presents a perfect opportunity to target the increasingly unpopular leadership of the Iranian regime. Needless to say, it doesn’t appear that Obama will be taking their advice any time soon; administration officials have strongly suggested they prefer to deal with Iran’s nuclear ambitions through diplomacy and sanctions.

The Iran hawks are supported by the Obama administration’s old nemesis Dick Cheney, who noted in an interview with Fox News last August that he was “probably a bigger advocate of military action than any of my colleagues” in the Bush administration. Without further ado, here is FP’s guide to this belligerent minority.

Money quote: “[Obama] needs a dramatic gesture to change the public perception of him as a light-weight, bumbling ideologue, preferably in an arena where the stakes are high, where he can take charge, and where he can trump expectations. Such an opportunity does exist: Obama can give orders for the U.S. military to destroy Iran’s nuclear-weapon capacity.” –Feb. 2, 2010, National Review

Justification: Pipes’s argument was not exactly framed in such a way as to gain adherents within the White House. However, his cold-blooded political justification is enough to make Dick Morris or Karl Rove blush: He cites five polls suggesting a military strike against Iran possesses the support of a solid majority of Americans and posits that others would undoubtedly “rally around the flag,” supporting Obama were he to unleash the bombers. Sarah Palin picked up this argument in an interview with Fox News on Feb. 7, claiming that a decision by Obama to declare war on Iran could boost his chances for re-election in 2012 — though she incorrectly cited Patrick Buchanan as the source of the idea.

And lest Obama fear that this electoral masterstroke would devolve into an Iraq-style quagmire, Pipes assures us that the United States could limit itself to airstrikes and employ only a few boots on the ground, “making an attack more politically palatable.”

Money quote : “Those who oppose Iran acquiring nuclear weapons are left in the near term with only the option of targeted military force against its weapons facilities. Significantly, the uprising in Iran also makes it more likely that an effective public diplomacy campaign could be waged in the country to explain to Iranians that such an attack is directed against the regime, not against the Iranian people…. Military action against Iran’s nuclear program and the ultimate goal of regime change can be worked together consistently.” –July 2, 2009, Washington Post

Justification : Although the unrest following Iran’s contested presidential election this past June convinced many pundits that a U.S. military strike would be counterproductive, Bolton took the opposite tack: With Iran’s hardliners “unmistakably back in control” following the first round of protests, he argued, the timing was ripe to convince the Iranian people that targeted airstrikes on Iran’s nuclear facilities were the fault of their dictatorial government, and not a foreign power.

Notably, Bolton doesn’t believe the Obama administration will do what he thinks needs to be done in Iran (nor, truth be told, was he sanguine that the Bush administration would listen to his advice in 2008). Instead, he’s putting all his faith in Israel to bomb Iran’s nuclear facilities, referring to the logic of an Israeli strike as “nearly inexorable.”

Money quote : “In short, the plain and brutal truth is that if Iran is to be prevented from developing a nuclear arsenal, there is no alternative to the actual use of force — any more than there was an alternative to force if Hitler was to be stopped in 1938.” –June 2007, Commentary

Justification : Podhoretz, the author of World War IV: The Long Struggle Against Islamofascism and one of the intellectual godfathers of the neoconservative movement, regards the showdown with Iran as the latest front in a “protracted global struggle” that has taken the United States from Baghdad to Kabul. In each case, he argues, the United States is defending itself from “Islamofascism” — the intellectual cousin of communism and Nazism that threatens to overwhelm the United States and its allies militarily, and also erode Western values from within.

Podhoretz sees Ahmadinejad as occupying the revolutionary vanguard of this movement: The first step in the Iranian president’s quest to transform the global balance of power will be to fulfill his promise to “wipe Israel off the map.” From there, Podhoretz fears, a nuclear-armed Iran will attempt to establish its hegemony over the Persian Gulf — and then extend its scope of influence into Europe. Finally, the coup de grâce: Iran will commit itself to neutering U.S. influence worldwide, and perhaps even attempt to fulfill its goal of “a world without America.”

As in the struggle against Hitler, the only option presented to the United States when faced with an enemy of such sprawling ambition, Podhoretz believes, is the use of military force. A U.S. air campaign, he hopes, could set back the Iranian nuclear program indefinitely and also provide the political preconditions for the overthrow of the Islamic Republic — a message that he also delivered in private meetings with President Bush. The only question, in his eyes, was whether Bush would summon the political fortitude to order the strike before he left office. As he wrote: “As an American and as a Jew, I pray with all my heart that he will.”

Money quote: “We must bomb Iran. It has been four years since that country’s secret nuclear program was brought to light, and the path of diplomacy and sanctions has led nowhere…. Our options therefore are narrowed to two: We can prepare to live with a nuclear-armed Iran, or we can use force to prevent it.” –Nov. 19, 2006, Los Angeles Times

Justification : Frustrated by the United States’ inability to convince Russia or China to commit to a truly biting sanctions regime — and despairing that Iran’s hard-liners could ever be forced from power — Muravchik believed the West’s only remaining option was to destroy Iran’s nuclear program before it could produce a bomb. Iran’s possession of a nuclear weapon would allow the Islamic Republic to establish regional hegemony over the Middle East, pose an existential to Israel’s, and erode what is left of the international nonproliferation regime, Muravchik feared. There was also the danger that Iran could “slip nuclear material to terrorists” — and not only its clients, such as Hezbollah and Hamas, but also al Qaeda.

Muravchik also took to the pages of Foreign Policy to make the case that full-throated advocacy of a U.S. military strike against Iran was what neoconservatives needed to overcome the stigma that had accumulated around the movement in recent years.

Money quote : “A military option against Iran’s nuclear facilities is feasible…. President Bush is right when he says Iran cannot be permitted to have nuclear weapons. The prospect of leaders like Ahmadinejad, who advocates wiping Israel ‘off the map,’ with their hands on nuclear weapons is a risk we cannot take. Diplomacy must be pursued vigorously, but the experience with Iraq suggests there’s little reason for optimism. Thus, a viable military option is imperative.” –April 24, 2006, Weekly Standard

Justification: McInerney has put more thought into the actual details of a U.S. military strike on Iraq than most other analysts. In an interview with Fox News host Bill O’Reilly, McInerney laid out a two-pronged strategy, kicked off by “a powerful air campaign that will hit within 36 to 48 hours over 1,500 aim points” in Iran, including its nuclear development facilities, air defenses, and its Shehab-3 missile sites.

This would soften up the Islamic Republic for the second part of the campaign — covert military operations designed to encourage Iran’s population to rise up in rebellion. McInerney is enamored of the prospects for division presented by Iran’s many ethnic minorities. Iran “is ripe for political discontent, and ripe for people to let the people have their country back,” he argued. McInerney’s plan raised consternation in liberal circles, who pointed out that he had suggested a similar plan in 2002 to topple Saddam Hussein’s regime. McInerney, however, appeared undoubted by the U.S. experience in Iraq, countering that Operation Iraqi Freedom “was a brilliant campaign done in 21 days.”

Perch : Senior fellow at the Council on Foreign Relations

Money quote : “If Israel’s intelligence agencies can provide reasonable assurance that the Israeli Air Force can derail the Iranian program for, say, six years, then the case for action becomes inescapable. But if they can only delay Iran for six months, is it really worthwhile to risk all the consequences that would come from an air strike? Perhaps so; perhaps the loss of Israeli prestige and deterrence advantage from Iran going nuclear would be so great that even a symbolic strike is worthwhile.” –July 2, 2009, Commentary

Justification : Following the post-election protests that rocked Iran last June, Max Boot echoed Bolton’s remarks regarding the increasing attractiveness of an Israeli airstrike on the country’s nuclear facilities. But it wasn’t the first time that he called for a more aggressive policy toward Iran — back in 2006, Boot laid out a plan to “do to Iran what the Iranians are doing to us in Iraq” by fomenting ethnic divisions within the country, and funneling weapons and money to anti-regime militias within the country. The only other option, in Boot’s eyes, would be a U.S. airstrike — a development that will become inevitable once the current policy of “half-hearted multilateral negotiations backed by toothless U.N. resolutions fails. (Or, rather, once its failure can no longer be denied.)” Foreignpolicy